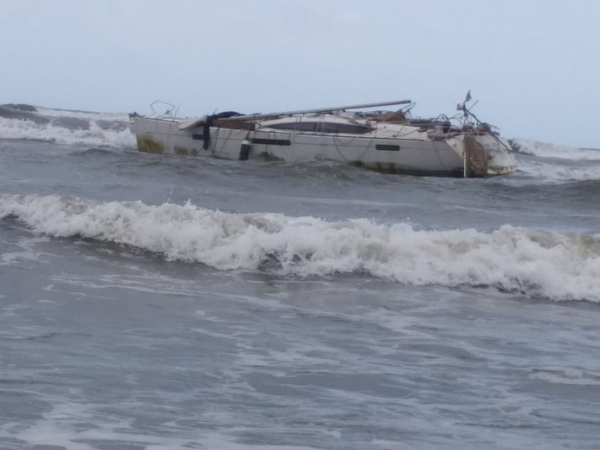 The abandoned boat found off a coast in the western Indian state of Maharashtra on Thursday, August 18, 2022. (Picture: Twitter account of All India Radio News)

Devendra Fadnavis, the deputy chief minister of the western Indian state of Maharashtra, on Thursday (18) assured the state’s assembly saying the boat found with some semi-automatic weapons in it off the coast in Raigad, located about 200 kilometres from the country’s financial capital Mumbai, belonged to an Australian woman.

He told the assembly that the boat had drifted due to inclement weather conditions and reached the Harihareshwar beach in Raigad.

The incident had alerted the state’s administration over a possible terror plan. It may be recalled here that in November 2008, terrorists had reached Mumbai in a boat from Pakistan and carried out a devastating campaign, killing many people, including foreign nationals in what remains the biggest terror attack in India till date.

2 suspicious boats found on the seashore of #Raigad district of Maharashtra, AK-47 and some bullets found from the boat. pic.twitter.com/YCKQL81iwx

“The boat found drifted off the Raigad coast is owned by an Australian woman. Some semi-automatic weapons have been found on it,” he said.

“Central agencies and the state police have started an investigation into the matter,” he added.

Earlier, a Coast Guard official said there was no security threat.

According to officials who called it the yacht, the crew members of this boat had been rescued in June near the Oman coast. It later drifted and grounded ashore, a Coast Guard official said. Some locals spotted the boat, having no crew member, in Shrivardhan area, and alerted security agencies. Raigad superintendent of police Ashok Dudhe and other senior officials rushed the spot and searched the boat.

Three AK-47 rifles and some bullets were found on the boat and the police were conducting further investigation, a police official said.

“It is a UK registered yacht which was sailing from Oman to Europe. It had given a distress call and people onboard were rescued by ships in the vicinity of Muscat on June 26,” the official said.

The boat also carried some small arms of the AK series, he said.

The arms vendor has been contacted and the serial numbers of the weapons found onboard match with the ones missing from the vendor’s inventory, the official said.

“Since a yacht moves slowly, it is permitted to carry small weapons. When the people onboard abandoned the boat, they did not carry the weapons with them,” the official said.

The official said the boat was badly damaged and partly submerged after being battered by the monsoon winds.