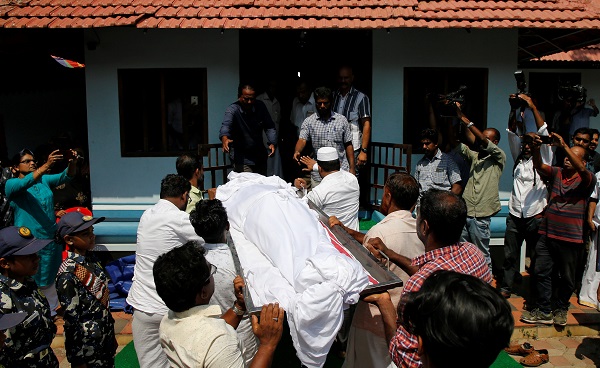 People carry the body of Anzi Ali Bhava, who died in mosque shootings in New Zealand, for funeral in Kodungalloor town in the southern state of Kerala, India, March 25, 2019 (Photo: REUTERS/Sivaram V).

The body of an Indian student killed in the Christchurch mosque attacks was returned on Monday (25) to her grieving family in Kochi, where relatives remembered a bright young woman dedicated to her studies.

Masters student Ansi Alibava, 25, was among at least five Indians shot dead by a white supremacist in New Zealand on March 15 and her body was the first of two to be repatriated.

Her body arrived at an airport in Kochi in the southern Indian state of Kerala early on Monday where it was received by relatives and government officials.

It was then taken to her nearby hometown of Kodungallur and put on display her mother Razia and brother Asif Ali weeping over the coffin before a funeral.

“She hails from a poor family and her whole family counted on her. She was a girl who took up the challenge to succeed in life in all adverse circumstances,” said KI Noushad, Alibava’s uncle.

She was praying at the Al Noor Mosque in Christchurch with her husband, Abdul Nazer, when the Australian gunman opened fire on worshippers, killing 43.

Another seven were murdered at a separate mosque when the shooter later turned his weapon on Muslims there in the worst violence of its kind ever seen in New Zealand.

Some families have opted for burials in Christchurch itself, where a national remembrance service for the victims will be held this week, two weeks after the tragedy that shocked the world.

Alibava started supporting her family after her father died five years ago in Saudi Arabia where he had been working.

She took out thousands of dollars in loans to fund her studies in business agriculture at Christchurch’s Lincoln University.

“She had gone there last year, the course was due to finish by April. There was to be a six-month training (course) after which she was to return home by December,” said Niyas.

Alibava also worked part-time at a supermarket with Nazer, who she married two years ago.

On March 15, they went to the Al Noor Mosque and sat separately in the men and women’s sections.

When gunfire broke out, Nazer managed to flee through an emergency exit but his wife did not make it.

When he returned to look for her, Nazer found his young wife motionless and face down, according to Indian media reports.

He was officially informed of her death 24 hours after the massacre.

Another Indian family who lost relatives in the attack opted for burial in Christchurch.

Father and son Asif Vora and Rameez Vora hailed from Gujarat, in western India, and were visiting family in New Zealand when they were killed.

The body of another victim also from Gujarat, Maheboob Khokhar, was expected to arrive late Monday at Ahmedabad airport. The body was due to be taken to a mosque for prayers and then to a burial ground.