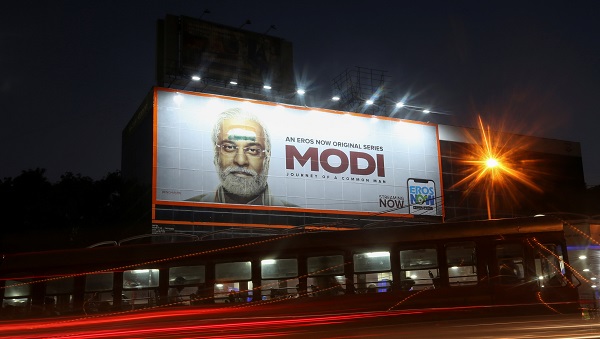 Traffic moves past a billboard of a web series, ‘Modi: Journey of a Common Man’ in Mumbai, India, April 8, 2019 (Photo: REUTERS/Francis Mascarenhas).

EARLY this year, a dozen of Bollywood’s biggest names took a private jet from India’s film capital of Mumbai to New Delhi for a private audience with prime minister Narendra Modi.

Subsequently, actor Ranveer Singh, who has nearly 22 million followers on Instagram, posted a smiling picture of himself hugging Modi, with a caption expressing his ‘joy’ at the encounter, drawing more than three million likes.

Bollywood is playing a lead role in Modi’s campaign for a second term, endorsing him on-screen and off, in both subtle and obvious ways, in a marked shift from the more transactional relationship Indian film stars previously had with politicians.

Modi asked filmmakers and stars to “talk about patriotism, and Indian culture and values,” in their films, said film producer Mahaveer Jain, who organised the January 10 meeting.

“He recognizes the soft power of Bollywood, and the impact it can have.”

As people younger than 35 form nearly two-thirds of India’s population of about 1.3 billion, with more than 15 million voting for the first time in general elections that begin on Thursday (11), approval from the leading stars could be key.

In recent months, Modi has met privately at least four times with several of Bollywood’s biggest personalities, most of whom have posted selfies with him on social media, accompanied by glowing captions.

“Together we would love to inspire and ignite positive changes toward a transformative India,” read a caption on director Karan Johar’s Instagram post of a star-studded group selfie with Modi that won more than one million likes.

He thanked the government for cutting taxes on movie tickets.

“There is perhaps no politician in the history of Indian politics who has been able to create a celebrity outreach program like Narendra Modi,” said Joyojeet Pal, a University of Michigan professor who has analyzed Modi’s social media feed since 2009.

Bollywood’s move to largely embrace Modi and his Bharatiya Janata Party (BJP) contrasts with the US, where Hollywood has typically taken up liberal-left causes and backed the Democrats, more lately lampooning President Donald Trump and the right-wing Republican Party.

One, “Uri-  The Surgical Strike” proved the year’s biggest hit, pulling in a gross of more than $35 million at the Indian box office.

In speeches, Modi and his ministers have repeatedly evoked the film, which indirectly lauds the prime minister and his national security adviser for planning a 2016 attack that India says hit terrorist camps in Pakistan-administered Kashmir.

But it has no political leanings, says director Aditya Dhar. “My film is a dedication to the Indian Army,” Dhar said.

The film released the same weekend as ‘The Accidental Prime Minister’, based on an unauthorized biography of Modi’s predecessor, Manmohan Singh.

That film, which did not succeed at the box office, projected open contempt for Singh, painting him as ineffective and forced to bow to the whims of the Gandhi family, which heads India’s main opposition party, the Indian National Congress.

“You can clearly say some of these films are propaganda films,” said influential film critic Rajeev Masand.

“There is no confusion on the agenda there.”

A biopic titled ‘PM Narendra Modi’ is set for release on Thursday (11), when the first votes are to be cast in the seven-phase election, and it follows a 10-episode web series on Modi’s life.

Not everyone is jumping on the Modi bandwagon.

More than 800 theatre artists, actors and film makers urged voters not to back Modi last week, but barring a few, most were independent and documentary film makers lacking the reach of Bollywood’s A-listers.

“The man portrayed as the saviour of the nation five years ago has destroyed the livelihoods of millions through his policies,” they said on the website Artists Unite.

“We appeal to our fellow citizens to vote for love and compassion, for equality and social justice, and to defeat the forces of darkness and barbarism.”

The main opposition Congress party has also sought to woo Bollywood and a separate source said filmmakers were invited to meet its leader, Rahul Gandhi.

The agenda for that meeting is unknown and Gandhi’s office did not respond to calls seeking comment.

“My Name is RaGa,” a less publicized movie about Gandhi, is also set for release this month.

Traditionally, Bollywood stars functioned as crowd-pullers at the odd election rally, often for remuneration. Though many later took the plunge into politics, no political party has deployed them as subliminal brand ambassadors before.

“This is alarming because Indian cinema is a huge influencer,” said Sandeep Chatterjee, professor of direction and screenplay at the Film and Television Institute of India.

“One can say people have a right to decide what they watch, but you cannot discount the influence Indian cinema has on people at large, especially young people.”