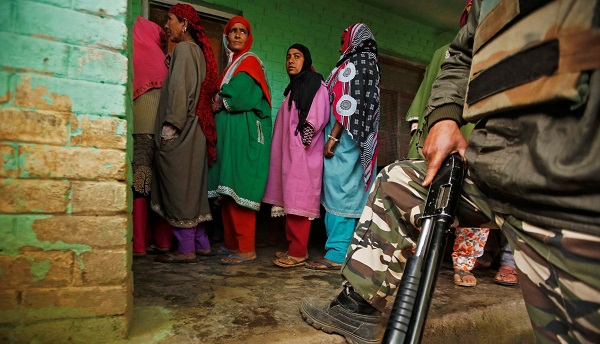 Women stand in a queue to caste their votes as a security personnel stands guard at a polling station in Kund, in south Kashmir’s Kulgam district April 29, 2019 (Photo: REUTERS/Danish Ismail).

AUTHORITIES in south India rescued dozens of bonded labourers from a farm on Friday (3) after a tip-off from awareness campaigners that they had been banned from voting in a national election.

The campaigners said they were trying to raise awareness of the importance of voting when they realised many migrant workers had not returned to their villages to cast their ballots.

After they raised the alarm 39 people who had been enslaved for a year at a plantation in the southern state of Tamil Nadu were rescued, 17 of them children, officials said.

“We were tipped off by activists who were campaigning to ensure that every citizen casts their vote,” said Dhandayuthanpani Somasundaram, the senior government official who led the rescue mission.

“In their testimonies, the workers have said that the owner had promised to let them go back to their villages to vote, but later refused.”

India outlawed bonded labour in 1976, but it remains one of the most prevalent forms of human trafficking in the country.

Unscrupulous employers and agents still dupe people into working without pay in fields, brick kilns, rice mills, brothels or as domestic workers to pay off debts.

Campaigners said many had been unable to vote in the staggered general election that began on April 11 and concludes on May 19.

“When we started the poll campaign, the idea was to encourage people in the tribal belts to vote,” said Kandasamy Krishnan, secretary of the National Adivasi Solidarity Council, which works on tribal rights.

“It was during this process that we found many villages had locked doors and realised that people who had migrated to work had not yet returned.”

The hunt for missing voters led Krishnan and his team to sugarcane and banana plantations where families had been working as bonded labourers.

Somasundaram said each family was working to pay off a debt of Rs 25,000 and had not been allowed to leave the farm even to cast their vote.

“It has been a challenge to get migrant workers back to their villages to cast their vote,” said migrant rights expert Umi Daniel, regional head of Aide et Action International, a Swiss-based charity.

“In these elections, some have been allowed to go home and vote, but wives and children have been kept as collateral by employers to ensure the worker returns.”