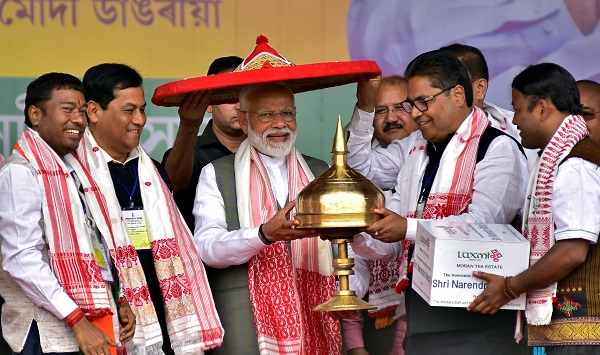 India’s prime minister Narendra Modi is presented a ‘Japi’ (a traditional hat of Assam) and a traditional brass metal pot by party members during an election campaign rally at Moran town in the northeastern state of Assam, India on March 30, 2019 (Photo: REUTERS/Anuwar Hazarika).

The potential benefits accruing to Indian prime minister Narendra Modi’s ruling alliance from a spike in nationalist sentiment following recent clashes with Pakistan might be waning, results of a nationwide opinion poll suggested.

Tensions with neighbouring Pakistan soared after a suicide bomb attack in Kashmir region that killed 40 Indian paramilitary police last month. The bombing was claimed by a Pakistan-based militant group.

That led national sentiment on security and terror-related issues in India to peak at nearly 29 per cent in early March after India retaliated with airstrikes on a suspected militant camp in northern Pakistan, according to CVoter polling agency.

However, it has since waned to about 15 per cent, as tensions have cooled, the agency said, citing its daily tracker of national sentiment.

“A cliff-fall for (the) security narrative complicates BJP’s positioning as this is one issue where BJP comprehensively dominates the Congress and in fact entire opposition,” CVoter said, referring to Modi’s ruling Bharatiya Janata Party (BJP) that will face off against the main opposition Congress in the general election scheduled to begin on April 11.

Pollsters say the airstrikes and nationalist rhetoric had diverted attention away from socio-economic issues, including increasing unemployment and an agrarian crisis, that critics have often used to lambaste Modi’s policies.

The new poll numbers suggest those issues may be back on voters’ minds, CVoter said.

At election rallies in recent weeks the BJP has played up the airstrikes and a subsequent anti-satellite missile test that Modi hailed as making India a military space power. Some opposition parties criticised the anti-satellite test announcement as a political gimmick.

“The impact of mission Shakti (anti-satellite missile) test is anticipated to show in the next few days,” CVoter said.

A coalition led by Modi’s BJP is widely expected to retain power in the looming general election, the world’s biggest democratic exercise with about 900 million eligible voters. Final results of the vote will be available on May 23.