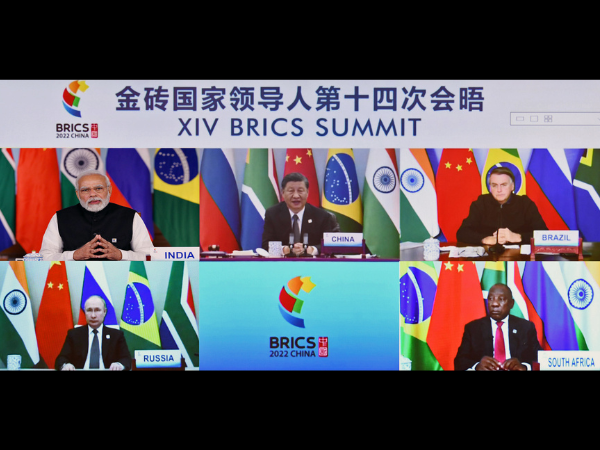 Leaders of the five BRICS nations interact virtually at the 14th summit on Thursday, June 23, 2022, which was chaired by Chinese president Xi Jinping. (ANI Photo/PIB)

MEMBER countries of the BRICS grouping on Thursday (23) issued a declaration stating that they discussed the situation in Ukraine and supported the negotiations between Kyiv and Moscow.

The Beijing Declaration of the XIV BRICS summit issued on Thursday reads: “We have discussed the situation in Ukraine and recall our national positions as expressed at the appropriate fora, namely the UNSC and UNGA. We support talks between Russia and Ukraine.” Leaders of Brazil, Russia, India, China and South Africa (BRICS) adopted a final declaration following the organization’s 14th summit today. The summit was held online and was chaired by China.

“We agree to continue deepening cooperation on competition issues of the BRICS countries and create conditions for fair competition for international trade and economic cooperation,” the declaration read.

BRICS countries also reaffirmed their commitment to a world free of nuclear weapons and vowed to promote more meaningful participation of developing and least developed countries in global processes.

“We recall the 2005 World Summit Outcome and reaffirm the need for a comprehensive reform of the United Nations, including its Security Council, in order to make it more representative, efficient and effective, and to make it more representative of developing countries, so that it can adequately to respond to global challenges,” the declaration read.

BRICS countries also noted that despite the COVID-19 pandemic and other challenges, the countries in 2022 have jointly continued enhancing solidarity and deepening cooperation on, inter alia, economy, peace and security, people-to-people exchanges, public health, and sustainable development by holding a series of meetings and activities, and contributed to tangible outcomes of BRICS cooperation.

The leaders reiterated their commitment to multilateralism through upholding international law, including the purposes and principles enshrined in the Charter of the United Nations.

They recalled the BRICS Joint Statement on Strengthening and Reforming the Multilateral System adopted by our Foreign Ministers in 2021.

BRICS also stressed that global economic governance is of critical importance for countries to ensure sustainable development and recall further our support for broadening and strengthening the participation of emerging markets and developing countries (EMDCs) in the international economic decision-making and norm-setting processes.

“We reaffirm our support for an open, transparent, inclusive, non-discriminatory and rules-based multilateral trading system, as embodied in the World Trade Organization(WTO). We will engage constructively to pursue the necessary WTO reform to build an open world economy that supports trade and development, preserve the pre-eminent role of the WTO for setting global trade rules and governance, supporting inclusive development and promoting the rights and interests of its members, including developing members and LDCs,” the statement read.