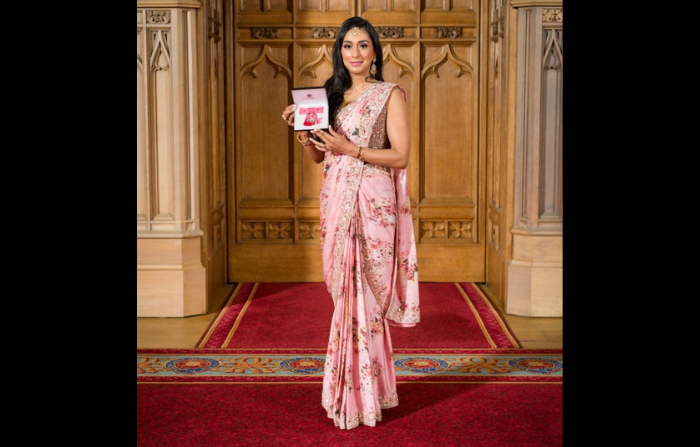 PERSONAL trainer and wellness coach Lavina Mehta was on Tuesday (14) awarded an MBE at the Windsor Castle for services to health and fitness during Covid-19 pandemic with a special focus on the Asian community and elderly people.

The 43-year-old Mehta from Watford, who is also a noted speaker, has involved herself with a lot of charity work over the last one year. She also became the Ambassador for Diabetes UK and face of Million Step Challenge for Diabetes UK, Alzheimer’s society Trek 26 (walking the marathon) & 10000 step challenge for Brain Tumour research – having lost loved ones and promoting the power of exercise to reduce the risk of chronic illnesses. She helps the participants with workouts and tips besides taking part herself.

Mehta’s free workouts with her 74-year-old mother-in-law, which she continues, have helped thousands globally, even those aged 100. She has made fitness accessible to all with her ‘exercise snacking’ concept which breaks down barriers of time, cost and motivation.

A mother of three, Mehta believes in the slogan: “Exercise for Sanity not Vanity”. A physical trainer for three-and-half years, Mehta has also featured on The Royal Family’s Instagram and Twitter accounts.

She left a successful corporate career 13 years ago to become a housewife and raise her three children. She then got requalified as a physical trainer just three-and-half years ago. She started her own fitness journey a decade ago but made quick progress to become an influencer with a large social-media presence. She has also emerged as a fitness role model in the South Asian community.

Mehta was born in the UK to parents who came to the country as immigrants in the 1960s to seek education. They began their livelihoods from scratch, prioritising her education. As a British-Asian, Mehta was inspired by statistics that indicated Asians to be less physically active with a higher risk of diabetes and heart disease in comparison to the white people. Ever since, she has been promoting health benefits of exercise to treat, prevent and reduce risks of rising chronic diseases. Just before the Covid-induced lockdown started, Mehta launched a national campaign to “Get UK Asians Fit”.

She is never hesitant to openly talk about her personal experiences and be a voice to break down the stigmas in community around factors such as weight, exercise, the role of woman, mental health, being a mother and restarting a career.

Mehta regularly appears on television, radio, podcasts and events and as keynote speaker to promote wellness.

The announcement of her candidature for the MBE honour was made in October last year.