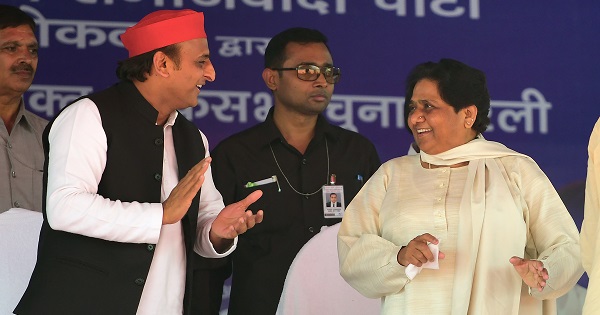 Seeing the bad state of affairs in the polls, the BJP and its supporters tried to create misunderstanding between the BSP and the Samajwadi Party but they failed, Mayawati said (Photo: SANJAY KANOJIA/AFP/Getty Images).

BSP president Mayawati termed the BSP-SP-RLD alliance a combine of ideas and said it will not sit silent till the Yogi Adityanath government in the state and the Narendra Modi government in the Centre were uprooted.

“Unlike the Bharatiya Janata Party, this alliance is that of ideas and it will not sit silent till it uproots the Yogi Adityanath government in Uttar Pradesh along with the Narendra Modi government,” the Bahujan Samaj Party president said, addressing rallies for the candidates of the alliance in Mirzapur and Chandauli on Friday (17).

“The sad faces of the BJP leaders after the completion of six phases of polling indicate that they know it’s time for the Narendra Modi government to go. Their bad days will start from May 23. After that, preparations for Yogi to return to his Mutt will start,” she said.

Seeing the bad state of affairs in the polls, the BJP and its supporters tried to create misunderstanding between the BSP and the Samajwadi Party but they failed, Mayawati said.

“This alliance has been formed after due consideration and will last long,” she asserted.

Mayawati exhorted the electorate to ensure BJP state unit president Mahendra Nath Pandey, in the fray for the Chandauli seat, losses his deposit.

Mayawati said the amount of work the BSP and the SP have done for the sisters and daughters of the state had not been done by any other party.

She said when in power her government had taken steps to connect Naxal infested areas with development works.

“Instead of killing Naxals, we extended employment and food. We gave employment to the poor people of Sonebhadra (naxal infested area) and later the SP government did a lot of work in this direction,” she said.

Stating that SP president Akhilesh Yadav had put in a lot of effort to ensure BSP candidates fared well in the polls, Mayawati said it was the BSP’s moral responsibility to ensure the victory of SP candidate from Chandauli.

Samajwadi Party president Akhilesh Yadav, in his address, said the ‘mahagathbandhan’ had wiped off the BJP in the six phases of polling because of which their leaders were having sleepless nights.    “As May 23 is nearing, their (BJP) fear is rising,” he said.

Attacking prime minister Narendra Modi, Akhilesh said, “He (Modi) wants to teach us about socialism. Says that Samajwadis do not know anything about socialism. I want to say the PM will have a lot of time after two days. We will send some books of Dr Ram Manohar Lohia.  He will get to know a lot about India once he reads ‘Hindu Banam Hindu’ and ‘Itihas chakra’.

“Those who want to break this alliance will themselves get broken,” he averred.

The SP president said in the past five years the prime minister had pushed the country backwards in the race for development and harmed the economy.