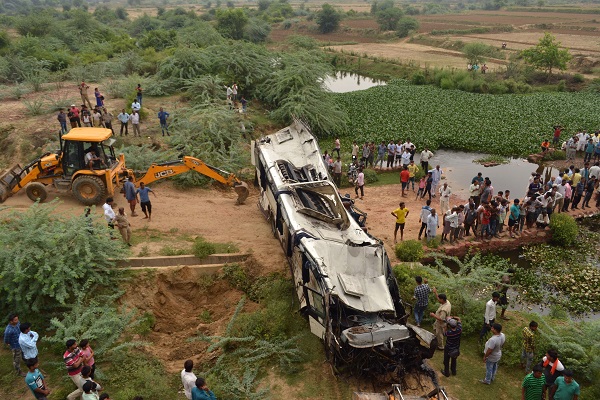 TOPSHOT – Onlookers and Indian police gather around the crumpled remains of a bus that crashed on the Delhi-Agra expressway, near Agra on July 8, 2019. A bus careered off one of India’s busiest roads early July 8 killing at least 29 people, police said (Photo: PAWAN SHARMA/AFP/Getty Images).

A BUS on Monday (8) skidded off an expressway to India’s northern city of Agra, and fell into a drain, killing 28 people, after its driver apparently dozed off at the wheel, police said.

Indian roads are among the world’s deadliest, with 464,910 accidents in 2017 that killed nearly 148,000 people, the latest government data shows.

More than 40 people were on board the bus travelling from New Delhi, the capital, when it went off the six-lane, 165 kilometre (103-mile) -long highway, the site of several accidents, and a police official said 18 passengers were injured.

“The cause of the accident is a matter of investigation, but initially it seems that the driver of the bus fell asleep,” said Agra police superintendent Bablu Kumar.

Video images showed the mangled remains of the bus half-submerged in the drain as rescuers struggled to extricate bodies.

Last week, authorities in Uttar Pradesh state, where Agra is located, warned speeding drivers they would face stiff fines, but enforcement of traffic laws has been lax.