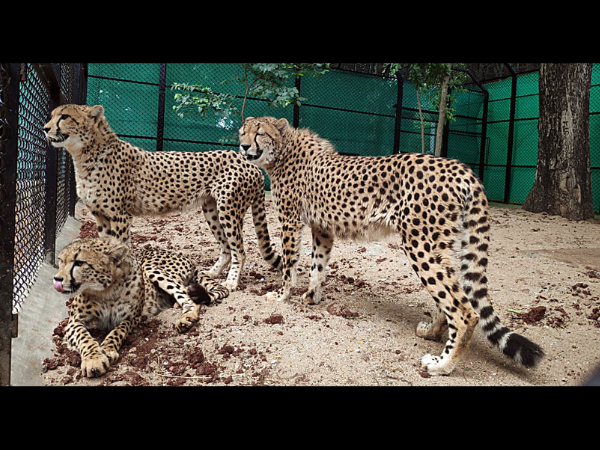 INDIA and Namibia on Wednesday (20) signed a crucial memorandum of understanding (MoU) for the reintroduction of cheetahs, declared extinct in the country in 1952. A senior environment ministry official said the first batch comprising four male and as many female cheetahs will arrive from Namibia in August.

“Talks are on with South Africa too. An MoU will be signed with them as soon as we get approval,” the official said. The fastest land animal in the world will find a new home in the Kuno-Palpur National Park in Sheopur district of central Indian state of Madhya Pradesh. The cheetahs are likely to be brought to India before August 15, another official said. The cheetah is the only large carnivore that got completely wiped out from India, mainly due to over-hunting and habitat loss.

The last spotted feline died in 1948 in the Sal forests of Chhattisgarh’s Koriya district. Namibia has the world’s largest population of cheetahs.

According to the pact, the two countries will share and exchange expertise and capacities to promote cheetah conservation in their ranges.

They will collaborate in areas of climate change, environmental governance, environmental impact assessments, pollution and waste management, etc. and undertake an exchange of personnel for training and education in wildlife management, including sharing of technical expertise, wherever relevant.

At the first wildlife board meeting of Independent India in 1952, the government had “called for assigning special priority for the protection of the cheetahs in central India” and a “bold experimentation to preserve the cheetah” was suggested.

Subsequently, negotiations commenced with the Shah of Iran in the 1970s for bringing the Asiatic cheetah to India in exchange for Asiatic lions. Keeping in view the small Asiatic cheetah population of Iran and the genetic similarity between the Iranian and the African cheetah, it was decided that the latter would be introduced in India.

Ten sites were surveyed between 2010 and 2012. Kuno National Park (KNP) in Madhya Pradesh was considered ready for receiving cheetahs with the least management interventions since a lot of investments had been done in this protected area for reintroducing Asiatic lions, which are also an endangered species.

Spread over 748 square kilometres, KNP has an adequate prey base. It is devoid of human settlements, forms a part of the Sheopur-Shivpuri deciduous open forest landscape and is estimated to have a capacity to sustain 21 cheetahs. Once restored, the larger landscape can hold about 36 cheetahs.

The carrying capacity can be further enhanced by including the remaining part of the Kuno Wildlife Division (1,280 sq km) through prey restoration. The action plan for cheetah translocations in KNP has been developed in compliance with International Union for Conservation of Nature (IUCN) guidelines and considering site assessment and prey density, current cheetah carrying capacity of the national park, among other criteria, the Union environment ministry said. Financial and administrative support to the cheetah reintroduction programme in India would be provided by the ministry through the National Tiger Conservation Authority.