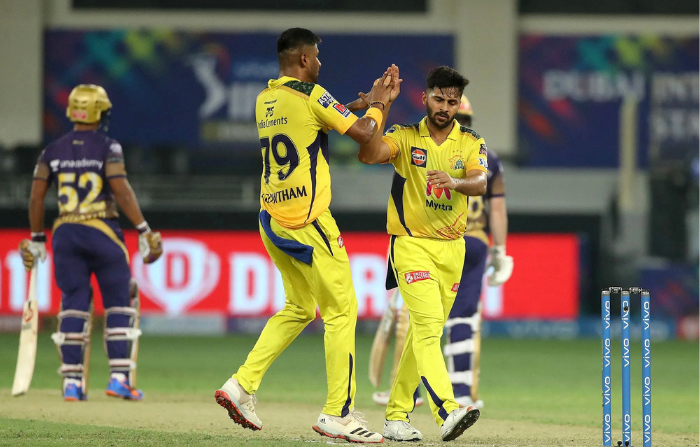 CSK players celebrate the fall of a KKR wicket in the final of the Indian Premier League 2021 at the Dubai International Stadium in Dubai on Friday, October 15, 2021. (ANI Photo)

This was CSK’s fourth title and they are the second-most successful team in the tournament now after Mumbai Indians who have five titles. The KKR were eyeing their third title but failed to repeat their 2012 feat when they defeated Dhoni’s side in a high-scoring final in Chennai. Chennai have won the 2010, 2011 and 2018 editions earlier but lost as many as five finals.

KKR skipper Eoin Morgan won the toss and sent CSK to bat first and powered by openers Faf du Plessis’s 86 runs off 59 balls and Ruturaj Gaikwad’s 32 off 27, the yellow brigade were off to an impressive start. Robin Uthappa made a brisk 31 off 15 and Moeen Ali slammed 37 not out off only 20 to help CSK post a challenging 192 for 3 in their 20 overs.

KKR’s bowling saw a bad day in office after their impressive shows in the last two matches in which they restricted their opponents in the 130s. Sunil Narine, the hero of the eliminator against Royal Challengers Bangalore, took two wickets for 26 while Shivam Mavi got one.

KKR started their chase in style with their in-form openers Shubman Gill (51 off 43) and Venkayesh Iyer (50 off 32) adding 55 runs inside the first six overs. The partnership was broken in the 11th over when Shardul Thakur picked Iyer with the team score at 91. Nitish Rana failed for a duck and suddenly KKR’s struggling middle over came under pressure. None of the next five batters could get into double figures and once Gill perished in the 14th over, the task became almost impossible for the Knight Riders who made a fantastic turnaround in the tournament after it resumed in the UAE last month.

For Chennai, Thakur was the most successful bowler with three wickets for 38 runs while Josh Hazlewood took two for 29 and Ravindra Jadeja two for 37. Deepak Chahar and Dwayne Bravo took a wicket each.

Du Plessis was adjudged the player of the series while Bangalore pacer Harshal Patel was chosen as the man of the series with 59 runs and 32 wickets. Gaikwad scored the most number of runs – 635.

Dhoni became the oldest captain to win an IPL crown at the age of 40, breaking the record of former Australia spinner Shane Warne who had led Rajasthan Royals to win the inaugural edition of the tournament in 2008. Dhoni was the losing captain in the final of that edition.