CWG 2022 cricket: India women had Australia in coffin but fail to find the nails 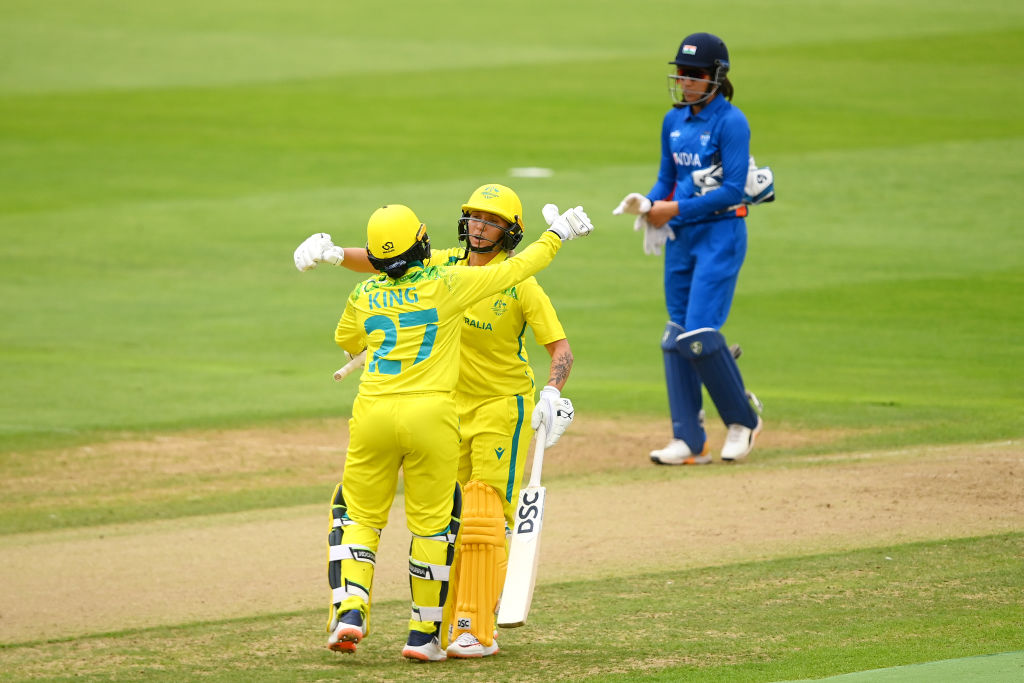 Australia batters Alana King and Ash Gardner celebrate after clinching a victory over India in a Round Group A match at the Birmingham 2022 Commonwealth Games at Edgbaston on July 29, 2022. (Photo by Alex Davidson/Getty Images)

A GUTSY half-century by Ashleigh Gardner and a solid cameo from Grace Harris, backed by an outstanding spell by Jess Jonassen, helped Australia stage a comeback to register a three-wicket win over India in their campaign opener T20I match at the ongoing Commonwealth Games 2022 in Birmingham on Friday (29).

With this loss, India’s medal hopes in cricket have taken a dent and they head into their match with arch-rivals Pakistan on July 31. India could not defeat the world champions despite great knocks from skipper Harmanpreet Kaur (52) and Shafali Verma (48) as Jonassen (4/22) crushed India’s middle order. Australia pulled off a win from jaws of defeat. India’s Renuka Singh (4/18) inflicted a lot of initial damage on Aussie batting. But her efforts could not take India to a win as Gardner (52*) and Harris (37) helped Australia muster the winning score.

Electing to bat first, India had a shaky start as they lost their star opener Smriti Mandhana for 24 off 17 balls. She was looking good and had smashed five boundaries before Darcie Brown sent her back with catch taken by Alyssa Healy.

Shafali Verma carried the innings forward and built a 43-run stand with Yastika Bhatia, the wicketkeeper batter. Bhatia was dismissed for 8 after an unfortunate run-out. Bhatia was also dismissed by Jess Jonassen for 48, two runs short of her fifty.

Kaur scored the first-ever half-century of CWG 2022 and first by a women’s player at the event and fell as the seventh wicket for 52 off 34 after being bowled by Megan Schutt.

India posted a modest 154/8 on the board in their 20 overs. Schutt took two wickets while Brown took one.

Chasing 155, Australia was off a terrible start as medium pacer Renuka Singh feasted on its top four batters. Alyssa Healy (0), Beth Mooney (10), captain Meg Lanning (8), Tahlia McGrath (14) fell to bowling prowess of Renuka. Deepti Sharma dismissed Rachael Haynes for just nine. Half of the Aussie lineup was back in the hut with the score at 49.

Then duo of Ashleigh Gardner and Grace Harris started turning things back in favour of Australia. Their 51-run stand helped the side cross 100 runs. Meghna Singh delivered the breakthrough for India by dismissing Harris for 37 runs off 20 balls. Deepti dismissed Jonassen for just three, sinking Aussies to 110/7.

Renuka Singh finished the match with amazing figures of 4/18, though not enough to secure a win. Deepti took two wickets while Meghna took one.

Gardner and Alana King kept their composure and took their side to a victory. Gardner finished with an unbeaten 52 and King with 18. Australia scored 157/7 in 19 overs. The comeback by Australia left Indian fans disappointed who were expecting their team to cruise through after half of the Australian side dismissed below 50 runs.