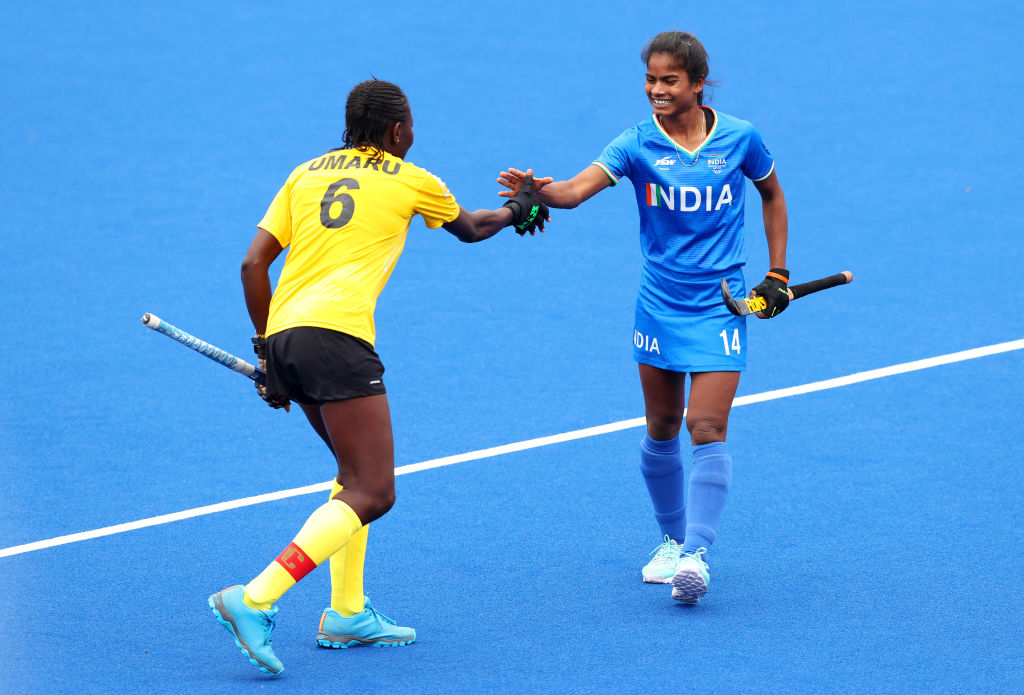 Ghana’s Nafisatu Umaru interacts with India’s Sangita Kumari during a Pool A match in women’s hockey at the Birmingham 2022 Commonwealth Games at University of Birmingham Hockey & Squash Centre on July 29, 2022. (Photo by Luke Walker/Getty Images)

THE Indian women’s hockey team opened their campaign at the Commonwealth Games 2022 in Birmingham with a solid 5-0 win against Ghana on Friday (29).

Gurjit Kaur (3′, 39′) scored a brace in the match while Neha (28′), Sangita Kumari (36′), and Salima Tete (56′) also scored a goal each in the Pool A contest to help their team pick up the all-important win. India started the match on the front foot with Jyoti creating an early chance from the right flanks, passing the ball to Navneet Kaur inside the circle. Navneet’s shot on target was saved by Ghana goalkeeper Boye Abigail.

But India’s wait to get on the scoreboard was short-lived as Gurjit Kaur scored a minute later from the first Penalty Corner of the match, helping India to a 1-0 lead. India continued to maintain possession, keeping the pressure on Ghana’s defence as the first quarter came to a close.

India continued to make circle penetrations in the early minutes of the second quarter. Sharmila Devi and Sonika pressed deeper from the right flanks but Ghana’s defence was quick to avert the danger. Savita rose to India’s rescue when Ghana’s Elizabeth Opoku took a shot on target.

Minutes later, Savita also saved a Penalty Corner as India maintained their lead. Neha extended India’s lead to 2-0 just at the stroke of halftime with a brilliant move from the left flanks.

India earned an early Penalty Corner in the second half but Ghana’s Adizatu Sulemana made a sensational save to deny India and she started a quick counter-attack. But Savita stood tall and strong on the other end and cleared away the danger. A move created by Monika and Lalremsiami from the left flanks allowed Sangita Kumari to hit the ball into the nets and India extended their lead to 3-0. Minutes later, Gurjit Kaur converted from a penalty stroke as India took their lead to 4-0, taking complete control of the match before the final quarter.

With a 4-0 lead, India kept hold of the possession in the final quarter, ensuring to keep the ball away from Ghana players. With only a few minutes left in the game, Ghana showcased urgency as they tried to get a goal back in the contest. Monika continued to threaten Ghana’s defence in the final quarter, creating penalty corner opportunities for her team.

But Ghana kept India at bay until Neha created an opportunity in the final few minutes, finding Salima Tete inside the circle. Salima struck the ball towards the net to extend India’s lead to 5-0.