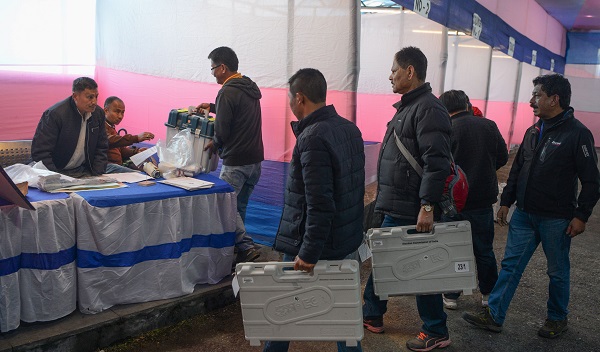 WITH the counting day for the Lok Sabha polls less than three weeks away, the Congress on Friday (3) urged the Election Commission (EC) to take various safeguards regarding electronic voting machines (EVMs).

It also urged the EC to issue certain guidelines to ensure electoral integrity and free-and-fair polls in Amethi.

Abhishek Manu Singhvi, who was part of a Congress delegation that submitted two memorandums to the poll panel regarding the aforementioned matters, told reporters: “They (EC officials) have listened to these questions sympathetically. We are hoping that they would be taking action quickly.”

In one of the memorandums, the opposition party has said: “the details of each EVM be provided well in advance, including the number of the machine and the polling booth to which it is assigned”.

Last month, the Supreme Court directed the EC to increase the random checking of voter-verified paper audit trail (VVPAT) slips from one booth per Assembly segment to five for better voter confidence and credibility of the electoral process.

“The important question that we have raised is that in this general election if mistakes or illegal things are found using the auto check — whether in five out of five places or in four out of five places — what action would be taken by the EC? It is not written in any rule or regulation of the poll panel,” Singhvi said.

He said the EC should tell which EVM from which polling booth was being brought to which counting centre.

“For example, if there are 10 EVMs at polling both, those should be marked from number 1 to 10, so that when counting happens, we can match the EVM’s number. Thus, if there is an 11th EVM, we will come to know,” the Congress leader said.

The party has also asked the EC for data on how many machines malfunctioned or how many of those were replaced during polling.

The Congress leader added that the EC was also requested to ensure a free-and-fair election in Amethi. Congress president Rahul Gandhi is fighting the ongoing Lok Sabha polls from two constituencies — Amethi in Uttar Pradesh and Wayanad in Kerala.

Referring to Union minister Smriti Irani, who has been fielded by the ruling Bharatiya Janata Party (BJP) from Amethi, Singhvi said: “The Uttar Pradesh government has pushed forward all the proposals of a woman minister of the central government.

“It has tried to demonstrate that only BJP workers or ministers have been able to get work done there. Rahul Gandhi’s proposals are being obstructed and delayed.”

He added that the Congress had urged the EC to increase the presence of security personnel at every booth in Amethi.