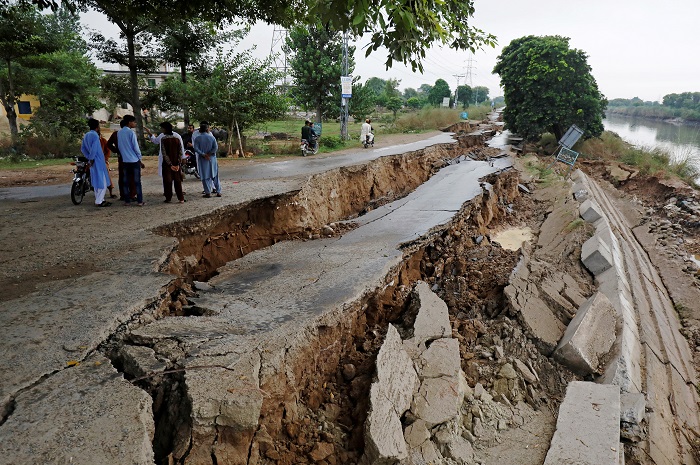 People gather near a damaged road after an earthquake in Mirpur, Pakistan September 25, 2019 (REUTERS/Akhtar Soomro).

THE death toll in the devastating earthquake that rattled Pakistan-occupied Kashmir and several cities in the country rose to 30 on Wednesday (25) as authorities stepped up relief efforts.

The epicenter of the powerful 5.8-magnitude earthquake, which occurred at around 4 pm local times on Tuesday (24) at a depth of only 10 kilometres, was near Mirpur city in the Pakistan-occupied Kashmir (PoK), roughly 20 kilometres north of Jhelum in Punjab, according to the US Geological Survey.

The earthquake resurrected the haunting memories of a monster tremor that had wrecked the region 14 years ago.

The earthquake – which also jolted several cities of Punjab and Khyber-Pakthunkhwa province – left at least 30 people dead and over 370 wounded, the disaster management officials were quoted as saying by the Express Tribune.

The number of casualties was likely to increase as around 100 of the injured were admitted to different hospitals in a critical condition, the report quoted the SDMA official as saying.
The areas worst hit were Mirpur city, a small town Jatlan and two villages Manda and Afzalpur, where buildings and homes collapsed, trees were uprooted and cracks appeared on roads large enough to swallow cars.

The quake was powerful and created panic as people ran out of building, eyewitnesses said.
National Disaster Management Authority (NDMA) Chairman Lt Gen Mohammad Afzal said at a briefing in Islamabad that trucks loaded with relief items, including 200 tents, 800 blankets, 200 kitchen sets, and 100 medical kits would reach the people affected by the earthquake soon.

“The NDMA is already providing medicines, food items and tents, which were in its stock in the affected areas, to the victims,” he added.

“Army troops have reached earthquake-hit areas of Mirpur, Jatlan, and Jarikas. Relief and rescue efforts are under way,” it said in a statement on Tuesday.

Chaudhry Mohammad Saeed, PoK’s Minister for Sports, Youth and Culture, told Dawn that a state of emergency had been declared in all public and private hospitals of the town.

A breach in the Upper Jhelum Canal caused by the earthquake inundated a number of villages along the Jatlan Road, around 140 kilometers south of Islamabad. The earthquake also damaged two pedestrian bridges over the canal, making it difficult for the locals to cross over, the report said.

Pakistan was also hit by a 7.6-magnitude quake on October 8, 2005, that killed nearly 90,000 people in PoK and Khyber Pakhtunkhwa.