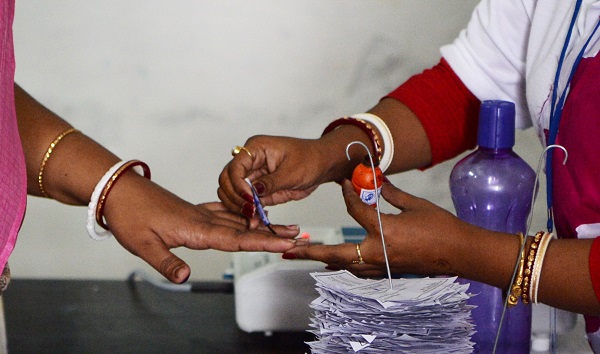 An Indian voter gets her finger inked after casting her vote at a polling station run by women election officials during the third phase of India’s general election at Malda in the Indian state of West Bengal on April 23, 2019 (Photo: DIPTENDU DUTTA/AFP/Getty Images).

OVER 1,500 complaints have been received till date through the ‘cVigil’ app by the office of the chief electoral officer in Delhi and nearly 70 per cent of those were found to be genuine, according to the Delhi CEO office.

The country’s Election Commission last year had launched an Android-based app – ‘cVigil’, using which a person can send to it geo-tagged videos and photos of illegal money being distributed or a hate speech being made during polls.

As many as 1,584 complaints have been received till April 25 from citizens on poll code violation through the app, according to data shared by the Delhi CEO office.

Of the total complaints, 1108 have been found to be correct and have been disposed of while the rest are being looked into, officials said.

Maximum complaints on ‘cVigil’ were received from the New Delhi district 518, followed by 210 from South district and 166 from South West district.

Seeking to encourage people to vote on May 12 when Delhi goes to polls in the Lok Sabha elections, Delhi CEO Ranbir Singh yesterday (25) took a ride in Delhi Metro and interacted with commuters urging them to exercise their franchise.

The North West Delhi constituency has over 2300000 electors, the maximum among all seven Lok Sabha constituencies in the national capital, according to data shared by the Delhi CEO Office on Thursday (25).

The office of the Delhi CEO has said that over 331000 posters, banners and hoardings have been removed since March 10, when the poll code came into force.

The CEO office has received 393 applications on pre-certification of political advertisements by various parties with the Bharatiya Janata Party (BJP) filing a maximum of 268 applications, followed by 102 from Congress, according to the data.