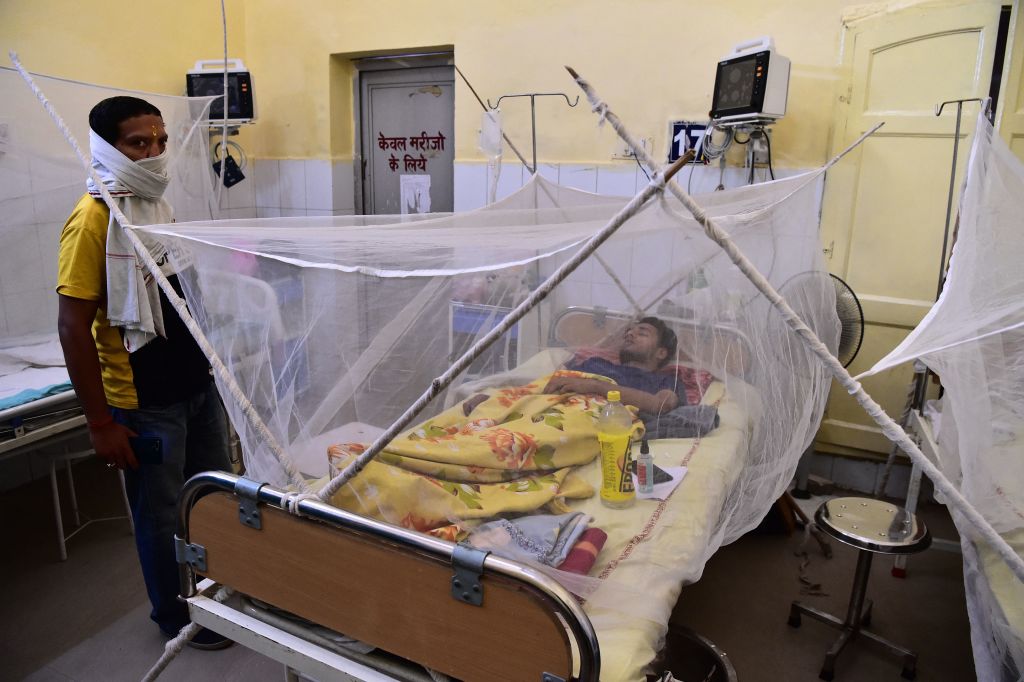 A patient lies under a mosquito net at the dengue ward of a government hospital in Allahabad in the Indian state of Uttar Pradesh on September 9, 2021. (Photo by SANJAY KANOJIA/AFP via Getty Images)

AN outbreak of dengue fever is suspected to be the reason for deaths of more than 50 people in the northern Indian state of Uttar Pradesh since the beginning of September and authorities have launched an urgent campaign to destroy mosquito-breeding grounds, Reuters reported.

Dinesh Kumar Premi, the chief medical officer of the state’s Firozabad district, the worst affected one, told Reuters that 58 people, including children, have died there alone, intensifying fears that India’s most populous state (more than 200 million live there) could be in the midst of its worst dengue outbreak in years.

“We are taking preventive measures and 95 health camps across the district have been operating in order to contain the spread of this fever,” Premi told Reuters.

A government official, who refused to be identified, said many of the children may have died because their poor families took them to fake doctors or quacks first and their conditions worsened soon after.

Ved Vrat Singh, UP’s top public health official, told the news outlet that while mosquito-borne dengue is the suspected cause of the deadly viral fever outbreak in UP, it has only been confirmed as the cause of deaths caused in three cases. He said an audit was underway to confirm whether it caused more deaths.

Officials in Firozabad have formed teams to inspect households for water-logging and fumigate the areas that are at risk. They have also released thousands of Gambusia fish that eat mosquito larvae into water bodies.

India saw dengue deaths plummeting to a low of 56 last year, a drop by nearly 83 per cent since 2017.

Meanwhile, Indian prime minister Narendra Modi, who was in Aligarh in UP to launch a university on Tuesday (14), praised the state’s Yogi Adityanath government saying it made the state a shining example of “the double-engine government’s double benefits”. Adityanath, who belongs to Modi’s Bharatiya Janata Party, will seek his re-election next year. Modi himself represents UP’s Varanasi constituency in Lok Sabha, the lower house of the Indian parliament.