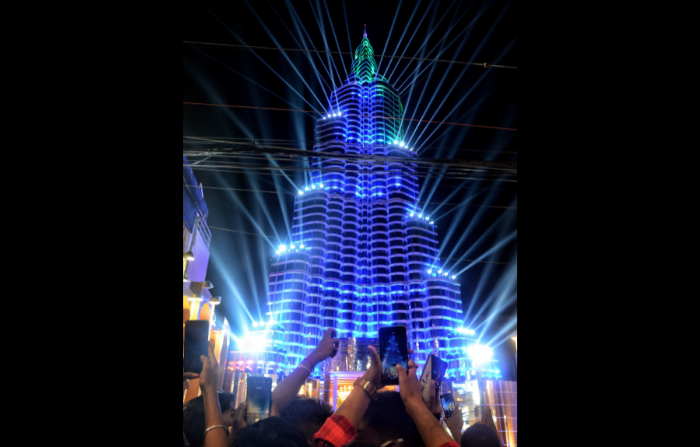 THE festival season has peaked in India and it seems the horror of the devastating second wave of the coronavirus pandemic which engulfed the country just a few months ago has faded in public memory as huge noisy crowds were seen thronging markets and fairs to celebrate. The country’s celebrities were also seen enjoying.

The pandemic though has not been a thing of the past and the virus is still claiming more than 200 lives daily in the country which has been the second-worst hit in the world after the US. However, the numbers are far less than the 4,000 fatalities daily as was recorded in April and May. The vaccination drive has also quickened in the country with more than 969 million people having received at least one dose.

Most activities have resumed in the country and the Covid-induced restrictions have been largely lifted but experts have still remained tense over the crowded celebrations of the festivals. India’s peak holiday season includes Durga Puja, Dussehra and Diwali – all major Hindu festivals that are celebrated with noise, light, crackers and exuberance across the nation. The celebrations were perhaps even more this time since people could not enjoy as much last year when the pandemic peaked and the vaccine had still not arrived.

It is also that part of the year when people splurge on new things, be it dresses, vehicles, jewelleries and other consumer goods – all of which contribute towards boosting the economy which has otherwise taken a toll because of Covid-related lockdowns.

In Kolkata (formerly Calcutta) in the eastern Indian state of West Bengal, people flocked “pandals”, temporary structures where the idols of Goddess Durga and her children and Mahishashura, the demon she flayed, are installed. These pandals are big attractions in themselves since they are built and decorated based on various creative themes.

At one place in Kolkata, a massive pandal has been erected modelled on Burj Khalifa, the iconic tower of Dubai, the United Arab Emirates, and it has attracted such a huge number of people that the local police had to barricade it and stop entry. The pandal was also fitted with a dazzling laser show but it was stopped later as pilots of aircraft taking off from and landing at a nearby airport complained about the lights.

The traffic police in Kolkata were found using loudspeakers to caution people about physical distance but mostly in vain. People were also seen without masks and many side Covid has already gone.

“It’s festival time so people will come and people will enjoy. Now there are no restrictions, the government has allowed us (to celebrate) so we are enjoying out here,” Aradhana Gupta, one of the revellers, told AFP.

Another reveller Riya Tai rued how she could not celebrate the festival last year when strict virus restrictions were in place.

“I am feeling happy (this time) although the crowd is excessive. I am sweating like hell but still I am enjoying it,” she said.

In Bengal’s neighbouring states of Bihar and Assam and western Indian states of Maharashtra and Gujarat, too, similar pictures were witnessed.

On Monday (11), the Narendra Modi government kicked off a campaign dubbed ‘Mission 100 Days’ with fears that the long festive season could see a resurgence of Covid-19.

“We are asking states to be extra vigilant during the next 100 days, and ensure that Covid-appropriate behaviour is observed,” a government official was quoted as saying by India’s Hindustan Times newspaper.

“Only then we will be able to save the country from an expected surge in cases.”

Community health expert Rajib Dasgupta, however, said the high coverage by the first vaccine doses was likely to protect the people from a fresh new surge, unless a highly transmissible variant emerges.

Concern was high in India about the probable emergence of a third wave which would affect the children, who are yet to be vaccinated, more.