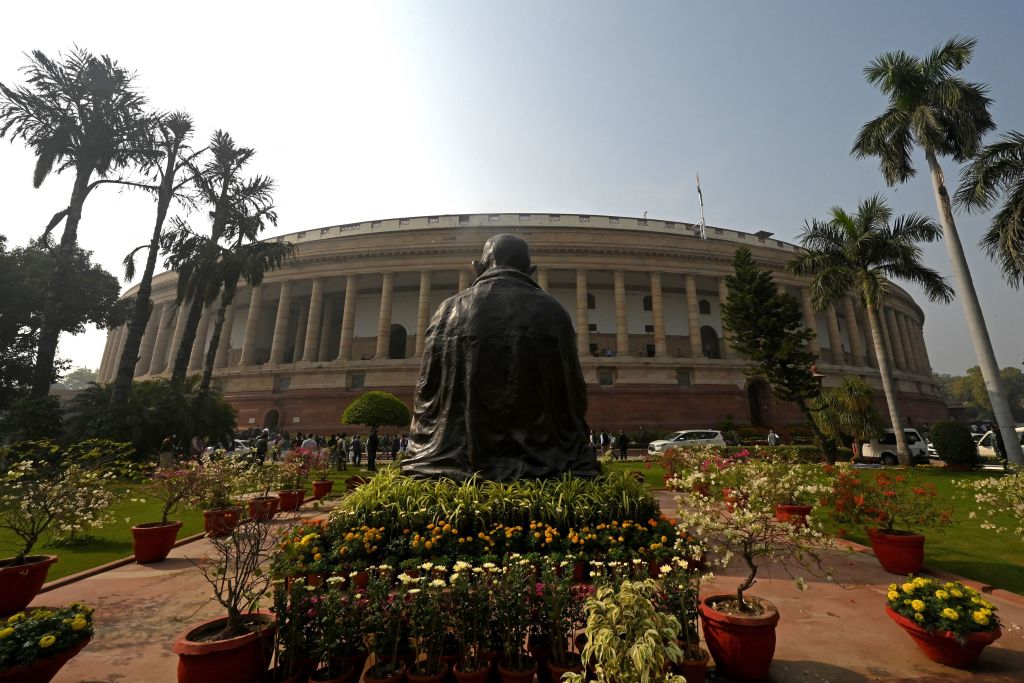 A general view of the Indian parliament building. (Photo by Money SHARMA / AFP) (Photo by MONEY SHARMA/AFP via Getty Images)

From its inauguration in 1927 to witnessing the foundation laying of a new Sansad Bhavan (parliament building) ahead of the 75th anniversary of India’s Independence, the multi-chequered history of the old parliament building will now be frozen in time, with the Monsoon session perhaps being its last legislative sitting.

The sprawling edifice covering an area of nearly six acres and its creamy sandstone colonnade of 144 pillars on the first floor is one of the most distinctive parliament buildings anywhere in the world, and one of the most defining and widely-recognised structure whose foundation was laid 101 years ago.

The Monsoon session of the parliament ended on Monday (7), four days ahead of schedule, after continued disruptions during the last three weeks over various issues.

If the Winter session takes place in the new building, it will mark an end of an era that the British-era architectural icon has witnessed in its 95-year-old journey, including the dawn of Independence in 1947.

While the tricolour replaced the Union Jack atop its majestic roof when India threw off the yokes of the British rule and the Viceroy House neighbouring it built around the same period soon assumed the avatar of the Rashtrapati Bhavan, the parliament building has essentially remained timeless albeit for a change of few names.

The parliament house and Sansad Bhavan are both used interchangeably in official parlance, while the building was named as a Council House when it was conceived by the British in 1920s after the imperial capital was shifted from Calcutta to Delhi after the grand durbar of 1911.

The odyssey of the old parliament building is also the journey of the new capital of India built under the rule of the then monarch King George V, later christened New Delhi by him in 1926, less than a month before the inauguration of the circular landmark.

On February 12, 1921, when the nation was still in the making and Independence 26 years away, Britain’s Duke of Connaught laid the foundation stone of the parliament house and said it would stand “as the symbol of India’s rebirth to yet higher destinies”. On its foundation centenary day last year, parliamentarians from various parties had sat in the Lok Sabha and the Rajya Sabha for the budget session and work continued on a new parliament building close by, while the milestone was a blip in history unnoticed by many.

The building, with a diameter of 560 ft and circumference of one-third of a mile, was designed by Sir Herbert Baker, who along with Sir Edwin Lutyens was chosen to design the new imperial capital in Delhi on a site in the Raisina Hill area. Placing the first building block of what would become the imposing circular, colonnaded structure that is the heartbeat of India’s parliamentary democracy, Prince Arthur, the Duke of Connaught and Strathearn, had recalled the grandeur of the Acropolis in Athens. He was an uncle of King George V, then reigning monarch of the British Empire, and laid a huge block of red sandstone bearing inscriptions in Hindi, English and Urdu in that order.

It carries his name and the historic date in Roman numbers — “XII February A.D. MCMXXI”. “I need only recall the Acropolis of Athens, the Capital of Rome, and the great cities of the East famous in past ages for their splendour and culture. India herself is rich in such precious legacies.

From the granite pillars on which the Apostle Emperor Asoka engraved his imperishable edicts, onwards through the chequered centuries, down to the splendid palaces of the Moghal Emperors, every age has left behind it some monument commensurate with its own achievements,” the Duke of Connaught said. Records show the grand ceremony took place with then Viceroy Lord Chelmsford – a recreational club named after him still stands a stone’s throw away – and a large number of ruling chiefs from princely states and other dignitaries in attendance.

The architectural masterpiece, which was originally called Council House, was inaugurated six years later in 1927, 20 years before India attained its freedom on August 15, 1947, by then Viceroy Lord Irwin. According to the plan, the building was to be constructed to house the imperial legislative chambers — the central legislative assembly (which took the form of the Lok Sabha), the Council of State (became Rajya Sabha) and the Chambers of Princes (now used for other purposes) — along with a Central Hall to house a library and a place to hold joint sessions.

All within the aesthetic round structure. In 1929, Bhagat Singh hurled a bomb into its chambers. At the Central Hall is where Jawaharlal Nehru welcomed India’s ‘tryst with destiny’ as India became independent on August 15, 1947, and where the Constitution took shape. Over the decades, as India evolved into the nation it is today, the parliament house has been witness to many moments in history – from cerebral debates to high-decibel, raucous discussions and the passing of legislations, some landmark and others controversial.