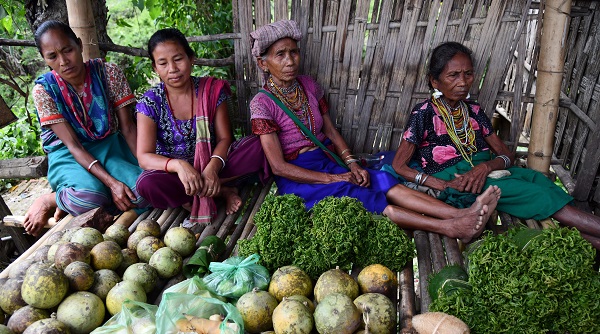 Many indigenous people have been moved from their homes in resource-rich tribal areas to make way for big projects or in the name of protecting wildlife, tribal rights campaigners say (Photo: BIJU BORO/AFP/Getty Images).

A MAN of few words, Chinnaguruvaiya Dasari struggled to express the joy he felt when he was given ownership of a two-hectare (five-acre) piece of land on the edge of the Nallamala forest in southern India.

After 25 years of working as a bonded labourer in the fields of other farmers, Dasari recalled standing at the edge of his own land feeling unsure about what his next move should be.

A member of the Chenchu indigenous tribe, he considers himself lucky to be one of only 20 people in his village who have so far been allotted land by the local government.

“We had been fighting for our land for nearly 15 years,” he said, sitting in the one-room school of his village in Prakasam district.

“We have participated in protests, submitted numerous petitions to stake claim to land that has traditionally always been ours.”

The Chenchu are among India’s 104 million indigenous people who are fighting for land ownership, a right that would protect them from getting trapped in debt bondage, one of the most common forms of slavery in India, say human rights campaigners.

Banned in 1976, bonded labour continues in many parts of India where people from poor, marginalised families are duped into offering themselves for work as security against a loan they have taken or debt inherited from a relative.

Indigenous people bear the brunt of exploitation as they are often unaware of their illegal recruitment and spend the next six months – or more – working to repay small loans taken during a medical emergency or festival, rights activists said.

“It is very common for contractors to come into these villages, give some advance (payment) and then take people to work as cheap farm labour,” said Ram Prathap Reddy, field coordinator of the charity Rural Development Trust.

Under the 2006 Forest Rights Act, at least 150 million people could have their rights recognised to about 40 million hectares of forest land, once the Supreme Court gives a final verdict on an ongoing case.

Meanwhile, across India, tens of thousands of indigenous people – also known as Adivasis (original inhabitants) continue waging individual battles for small patches of land to which they have an ancestral claim.

School teacher Bhumani Manthana is on a mission to help fellow Chenchus living in southern India’s Nagarkurnool district apply for land titles and stop them being exploited as cheap labour.

The Forest Rights Act guarantees indigenous Indians the right to inhabit and live off forests where their ancestors had settled.

But gaining that right is an arduous process, said Manthana.

“Each application goes through six committees before the government hands over land to a tribal,” he told the Thomson Reuters Foundation.

They are allowed to cultivate the land but have to adhere to certain restrictions on digging borewells and cutting down trees.

“Problems only crop up if they are in the core forest area or in the tiger reserve zones,” he said.

According to Reddy, over 300 people in Nagarkurnool district have been given land under the Forest Rights Act so far.

Chavadi Shankaraiyya is not one of them. For him, the process which started nearly 15 years ago has been tedious and frustrating.

“I have lost track of the applications I have written and the number of times I have stood, hands folded, in front of officials,” Shankaraiyya said.

The only graduate from his village, Shankaraiyya said all Chenchus traditionally had plots in the forest, but many have now lost access to them after their families were evicted from the land and relocated elsewhere.

“We don’t have pattas (land titles) to prove ownership and getting them is not easy,” he said.

Ramkrishna Surdeo travels across tribal belts conducting land literacy workshops that show how land rights can be eroded over generations.

He begins each training session with a series of pictures.

The first one shows tribal people living off the forest before the arrival of the “outsider” looking for minerals and cheap land.

Then the images that follow show the journey of people like Dasari, the farmer in Prakasam – from independently selling forest produce like honey to getting trapped in a cycle of debt and slavery.

The pictures remind villagers of what they have lost and how they lost it, Surdeo said.

“Culturally, land is their identity and they have endured being displaced so many times,” Surdeo said.

Many indigenous people have been moved from their homes in resource-rich tribal areas to make way for big projects or in the name of protecting wildlife, tribal rights campaigners say.

There are no official records of evictions in India, but data collected by the advocacy group Housing and Land Rights Network showed the government destroyed at least six homes and forcibly evicted 30 people each hour in India in 2017.

“They (the villagers) have vivid recollections of the forests they grew up in and the land that fed them,” Surdeo said.

“We trigger that memory and then educate them about the need for a legal document.”

Since getting his plot of land in 2015, Dasari has been growing millets and he employs up to 20 people to help with the harvest every season.

Remembering his days as a bonded labourer, when he toiled on someone else’s fields to repay a loan of Rs 5,000, he said he always makes sure to pay his workers promptly.

Dasari said he had no way of knowing how much money he had repaid and took the farm owner’s word when he was told that the interest on the debt had compounded and he needed to continue toiling on the field.

“Even though I worked hard and was honest, I was treated badly by my employers,” Dasari said softly.

“I don’t want to humiliate anyone who works on my fields, like I was. So, I pay on time and try to be considerate.”

Dasari still goes into the Nallamala forest for a week every month to collect forest produce like honey which he sells in the local markets.

“It is something I do best,” he said.

“Agriculture is new to me, but gathering forest produce is not. I feel at home in the forest, even though it is not really my home anymore.”