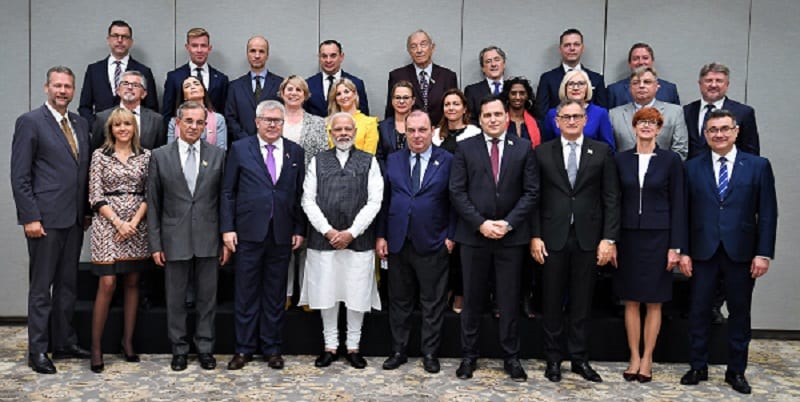 India’s prime minister Narendra Modi poses for a picture with a delegation of members of the European Parliament after their meeting in New Delhi, India, October 28, 2019 (India’s Press Information Bureau/Handout via REUTERS).

A GROUP of European Union lawmakers will visit Kashmir on Tuesday (29), the first foreign delegation since the special status of the Muslim-majority territory was revoked, Indian officials said.

Indian prime minister Narendra Modi’s government withdrew Kashmir’s autonomy in August, a move accompanied by a crackdown on dissent by security forces there, to head off protests. It has since said the situation is returning to normality.

Hundreds of people have been freed from detention and phone lines restored, although the internet remains suspended for fear it could be used to organise street demonstrations that have turned violent in the past in the region.

Pakistan, has condemned the change of status of the territory and warned it could drive more Muslims to extremism across the world.

The EU delegation of 27 lawmakers drawn from 11 countries will meet with government officials and residents to assess the situation in Kashmir, Indian officials said.

The Europeans will be the first foreign group visiting Kashmir since August. This month, US members of Congress expressed concern over a lack of access for diplomats and foreign media.

On Monday (28), the EU lawmakers met Modi who said the visit would give them a clear view of the development priorities of the region, his office said.

Modi, making the biggest political move in Jammu and Kashmir since an armed revolt erupted in 1989, has said that special rights for Kashmir, such as a ban on outsiders buying property, had hindered its development.

Within the region, which includes the Hindu-dominated Jammu region and the Buddhist enclave of Ladakh, the turmoil that was confined to the Kashmir Valley had held back the development of other parts of the state.

“Their visit to Jammu and Kashmir should give the delegation a better understanding of the cultural and religious diversity of the region of Jammu, Kashmir and Ladakh,” Modi said.

An Indian official said the EU group’s visit would open the door to visits by others. India is trying to counter Pakistan on the international stage. Islamabad has accused New Delhi of unleashing genocide in Kashmir.

Former Jammu and Kashmir chief minister Mehbooba Mufti, one of the scores of leaders detained since August, said on Twitter she hoped the lawmakers would be allowed free access.

“Hope they get a chance to speak to the people, local media, doctors and civil society members. The iron curtain between Kashmir & the world needs to be lifted.”