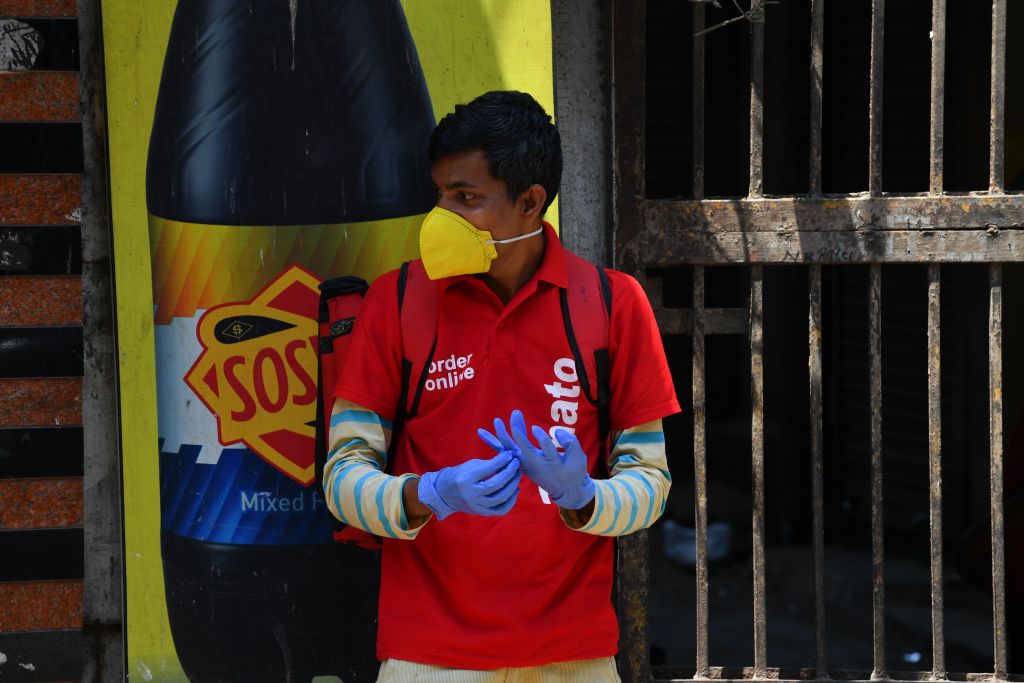 A food delivery worker of Zomato. (Photo by INDRANIL MUKHERJEE/AFP via Getty Images)

INVESTORS are now hunting Indian tech start-ups, likely to benefit in the post-pandemic world, after pumping in a record $30 billion via public and private equity deals this year, bankers and analysts said.

Global investors have flocked to online platforms in the country and helped swell the ranks of unicorns, or start-ups valued at $1bn or above.

In addition, a regulatory clampdown by China on its technology firms is spurring some foreign investors to turn to the world’s second-most populous nation instead, analysts said.

The fundraising boom in India by companies, ranging from an e-commerce platform to a food delivery app operator, comes even as the country’s economic rebound, already weakened in recent months, faces risk from coronavirus variants.

In private equity capital deals, which include placements and pre-IPO funding rounds, $22bn has been raised so far this year, according to Pitchbook data, putting India on track to exceed 2020’s record of $37bn.

Of the amount raised in 2021, foreigners invested $13.21bn in the first half of this year – the most ever – compared with $4.99bn in the same period last year, separate Refinitiv data showed.

In addition to that, there was $5.4bn raised via 43 initial public offerings (IPOs) year to date, making it the busiest period ever, the Refinitiv data showed, up sharply from $1.24bn during the same time last year.

IPO growth in India was about double the rate of growth in Asia, including Japan, in the first half, according to Refinitiv data, which show that $71.6bn was raised in Asia, up from $31.08bn in the period a year earlier.

Big-ticket public offerings in the pipeline for the rest of the year include an up to $2.2bn float by Indian digital payments firm Paytm, which counts China’s fintech giant Ant Group and Japan’s SoftBank among its backers.

“Covid has accelerated the existing trend towards digital consumerism, be that in food delivery, e-commerce or retail,” said Gaurav Maria, JPMorgan’s head of private capital markets in Asia Pacific.

The near-term IPO pipeline is set to get a boost from Indian food delivery firm Zomato Ltd’s blockbuster market debut last week. The stock surged nearly 66 per cent after the company raised $1.3bn in an IPO.

Walmart Inc-owned Flipkart also earlier this month raised $3.6bn in its latest funding round, doubling the Indian online retailer’s valuation to $37.6bn in less than three years, ahead of its expected market debut.

“This is a growing economy where the local market and businesses across sectors will grow faster than pretty much anywhere in the world,” said Devarajan Nambakam, a managing director at Goldman Sachs in India.