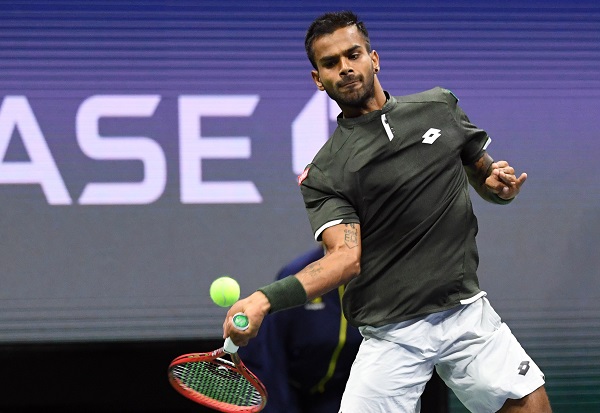 The 22-year-old showed little sign of nerves in Monday’s (26) first round match, coming out swinging to win the opening set against the five-time champion before exiting 4-6 6-1 6-2 6-4 (Photo: Danielle Parhizkaran-USA TODAY Sports).

MAKING a Grand Slam main draw debut against Roger Federer at a packed Arthur Ashe Stadium would have been overwhelming for many players but unheralded Indian Sumit Nagal handled the occasion like a seasoned veteran, earning a string of new admirers at the US Open.

The 22-year-old showed little sign of nerves in Monday’s (26) first-round match, coming out swinging to win the opening set against the five-time champion before exiting 4-6 6-1 6-2 6-4.

Federer, who has 20 Grand Slam singles titles to his name, saw his serve broken three times by the world number 190 and was impressed by his composure.

“I guess maybe how he handled the moment. Never easy to come out and play your best,” Federer, 38, said of his opponent, who has never earned a tour-level victory and only qualified for the US Open last week.

“Even though it’s kind of what you live for, you dream about, playing on the big stage. So I think he did that very well.

“I think his game is based on being really consistent, moving well, moving the ball around well. Sort of very much a clay-courter. That’s also the surface he’s played basically the entire year almost.

“I think he knows what he can bring. That’s why I think he’s going to have a very solid career.”

Even when Federer was on the brink of victory Nagal refused to roll over, earning four of his 13 break point opportunities in the final game as the Swiss served for the match in the fourth set.

That same fighting spirit saw him rally from a set and 3-0 down in the final qualifying round at Flushing Meadows against Brazilian Joao Menezes to earn his maiden appearance at the main draw of a Grand Slam.

Nagal said playing against Federer was a unique experience.

“He loves putting pressure on the other guy,” he said.

“He’s always making you think of what he’s going to do, and that’s how I felt. Players I have played, I never had this feeling.”

Monday was also the first time in more than two decades that India had more than one player in the main draw of a Grand Slam singles, with Prajnesh Gunneswaran losing to world number five Daniil Medvedev in an earlier match.

The last time the country of 1.3 billion had two singles players in the main draw was Wimbledon 1998 when Leander Paes and Mahesh Bhupathi were competing.

Like most kids growing up in India, Nagal wanted to be a cricketer but it was his father who insisted he swap bat and ball for a racket, setting him on his tennis path.

In 2005 Nagal caught the eye of Bhupathi, who won India its first Grand Slam title in 1997 when he won the French Open mixed doubles, at a trial for his academy and got selected from the thousands of youngsters present.

Nagal was ranked 361 at the start of the year after being sidelined by a shoulder problem but 2019 has already seen him make remarkable progress.

“He showed incredible composure against the greatest player in the world and held his own,” Bhupathi said.

“I think both he and his coaching team should be very proud of the improvements they have made this year.”