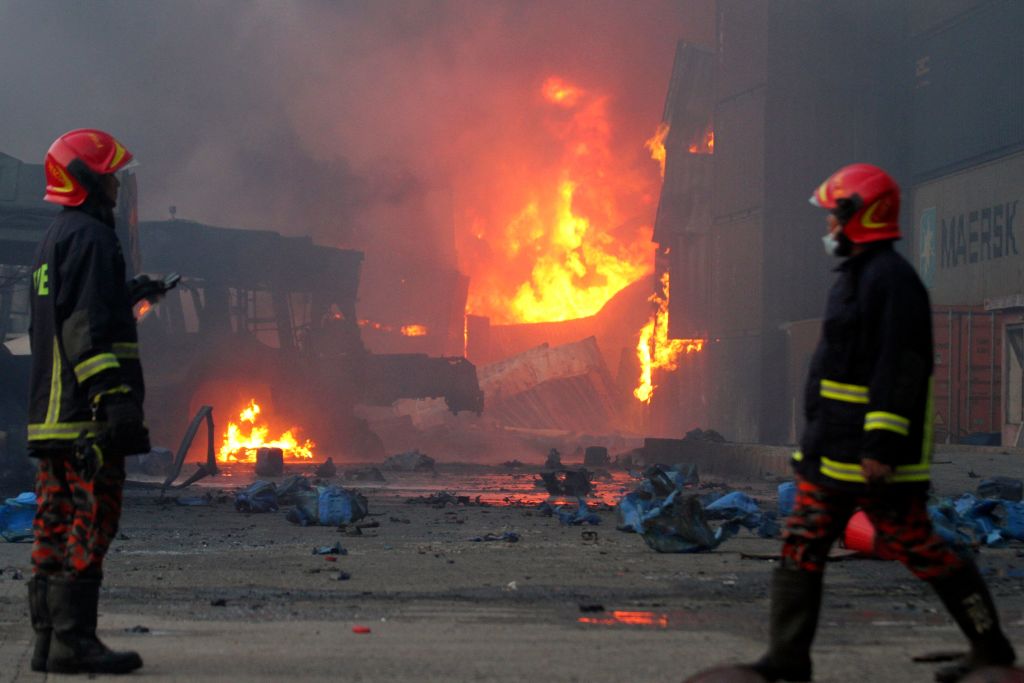 Firefighters at the site after a fire broke out at a container storage facility in Sitakunda, about 40 kilometres from the key port of Chittagong, Bangladesh, on June 5, 2022. (Photo by -/AFP via Getty Images)

BANGLADESHI firefighters were on Monday (6) struggling to douse the devastating container depot fire that killed over 40 people and injured nearly 300 even as an initial probe found that the private facility in the port city of Chittagong stored hazardous chemicals close to the export-bound garment products.

A massive fire broke out at the chemical container depot, a Bangladesh-Dutch joint venture, near the country’s main Chittagong Seaport on Saturday (4) night.

The number of fatalities is likely to go up as some of the injured are in critical condition.   “Our firefighters are still working to extinguish the fire and prevent the blaze, which visibly originated from chemical containers, from spreading further,” fire brigade spokesman Anisur Rahman told journalists near the scene. TV footage showed smoke billowing out of the BM Container Depot in Sitakunda, on the outskirts of the port city.

Official investigations were underway with the authorities constituting separate committees to probe the tragedy but the fire brigade said that its initial observations found that the depot had minimal safety equipment like hydrants. Fire officials alleged that the management of the container facility did not inform rescuers about the presence of chemicals, which could have saved many lives, including those of firefighters.

“It (depot) actually had no fire safety plan,” a fire official said, adding that containers with hazardous chemicals were kept with those full of export-bound garment products while it was an utmost necessity to maintain distance and take extra caution for chemical containers.

A journalist who is covering the salvage operations told PTI by phone that the entire depot site on 21 acres of land now “looks like a war devastated area”.

Some containers were still emitting smoke over 41 hours after the eruption of fire along with a series of subsequent explosions shattering the windows of buildings in the neighbourhood. Bangladesh earlier called out military sappers to join the firefighters while an Army officer said that they detected four “unexploded containers” of dangerous chemicals like hydrogen peroxide, forcing rescuers to proceed with extreme caution.

“The presence of chemicals made it difficult for us… it was too risky to work close by,” the officer told the country’s private Ekattur TV channel.

Police and media reports on Sunday (5) suggested that the fire and explosions killed 49 people, including nine firefighters, but authorities were revising the figure, saying their latest tally found the toll to be 41.

“The salvage campaign is underway and we are yet to enter deep down the spot… so we are yet to be certain about the casualty figures,” an Army official at the scene told reporters. He, however, said that they did not find any other body on Monday even as searches were underway. The firefighters were able to stop the intermittent explosions which were rocking the area until late Sunday.

Nearly 300 people were wounded in the fire with doctors saying many of them were critically injured as the fire burnt their breathing systems or vital body parts up to 70 per cent. Chittagong Medical College Hospital accommodated most of the wounded people followed by a Combined Military Hospital in the port city.

Sixteen of the injured people were brought to Dhaka, with several of them in Army helicopters for better treatment.

Chittagong district administration officials, meanwhile, said that 22 bodies were handed over to their relatives but several others appeared unrecognisable.

“It will take some time to perform the DNA testing to know their identity… We expect the process to be completed in the next one month,” said an official of the police’s criminal investigation department (CID) branch.

The CID was entrusted with the task of collecting samples to be tested in their lab while relatives of the missing people started giving their DNA samples. A forensic team led by Chittagong’s Criminal Investigation Department Additional Superintendent of Police (ASP) Jahangir Alam set up a booth in front of the Chittagong Medical College Hospital (CMCH) on Monday to cross-match DNA samples of unidentified victims of the fire, The Dhaka Tribune newspaper reported.

Alam said that samples were being collected from parents, siblings, or any two of the children of the unidentified victims.     Long queues of relatives of the victims formed in front of the booth to identify their loved ones in the early morning.

Bangladesh’s fire service and civil defence department suffered the worst disaster itself, losing their nine firefighters in the line of duty.

“Nothing can be more painful than this… it was so difficult for me to carry them (firefighters) on my shoulders, those that I have seen like my own sons, worked with them,” said an elderly fire official at the scene.

The BM Container Depot, which began its operation in 2012, is a joint venture of Bangladeshi and Dutch businessmen.