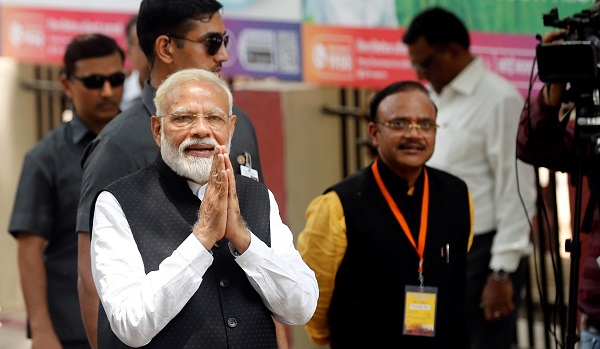 Noting that the “mood is festive” from Kashmir to Kanyakumari, Modi said the party workers are the real candidates.

“During yesterday’s roadshow here, I have sensed the hard work of party cadre,” he said amid chants of “Modi Modi” from the gathering.  The prime minister said he has worked honestly for good governance and the people have made up their minds that they want Modi sarkar again.

“The media knows the Varanasi election is all over. Now we just have to break all voting records… Efforts should be made so that the polling percentage of women is five per cent higher,” Modi said, asking every worker to reach out to 10 voters each till the polling day in this holy city.

He asked party workers not to bother about the “abuses by opposition” inflicted on him.

“Yesterday, when I was on my roadshow, people rebuked me on social media that I was not concerned about my security… Modi is protected by crores of mothers and sisters of the country,” he said.

“Don’t worry about what others say about me… I can make a lotus bloom in the dirtiest of water.”

He said, “A pro-incumbency wave has been seen in country for the first time after Independence. This is the first time the elections are being contested in this manner in the country”.

A galaxy of top BJP and National Democratic Alliance (NDA) leaders descended on the city and met the prime minister who visited the Assi Ghat and Kaal Bhairav temple.

LJP president Ram Vilas Paswan, who was here to take part in the nomination process, told reporters, “The results of the elections are already out and it is only a formality which is to be completed… Narendra Modi will take oath of the prime minister after May 23”.