Flooding At Large Coal India Mine To Halt Production 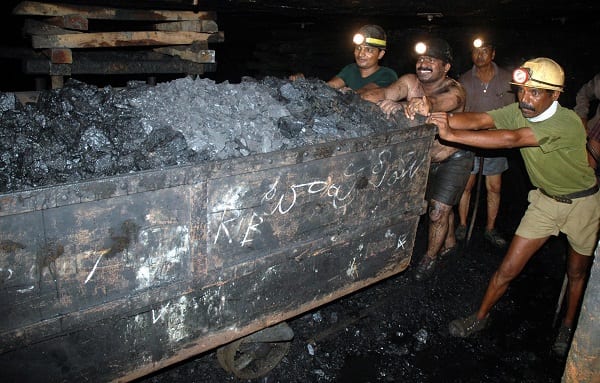 The flooding at the Dipka mine, which produces more than 30 million tonnes a year of thermal coal and accounts for some five per cent of Coal India’s overall output, could leave some power plants in eastern and central India scrambling for fuel (Photo: NOAH SEELAM/AFP/Getty Images).

FLOODING at one of Coal India Ltd’s largest open-pit mines will halt production there for at least a month, a senior company official said on Wednesday (2), in a setback for a country trying to reduce its dependence on coal imports.

The flooding at the Dipka mine, which produces more than 30 million tonnes a year of thermal coal and accounts for some five per cent of Coal India’s overall output, could leave some power plants in eastern and central India scrambling for fuel.

The mine supplies coal to multiple utilities including NTPC Ltd’s Sipat plant in the eastern state of Chhattisgarh, where the mine is located, and state-run utilities in western Maharashtra state.

Coal India declined to comment on the extent of the damage or the length of the likely production outage.

An NTPC official said the company’s plant in Sipat, which had no stock of coal as of September 30, according to government data, was trying to arrange alternate sources of coal, but the official declined to provide further details.

The outage also comes at an inopportune time as state-run Coal India is due to begin roadshows on Thursday to woo investors ahead of a planned stake sale in the company.

“This is a huge loss for us, and is a big setback to our production goals,” said the Coal India official, who asked not to be named as he is not authorized to discuss the matter with media.

The official said some expensive mining equipment may be damaged and had been submerged by the flooding that began on Monday (30), after embankments of a nearby river broke due to heavy rainfall.

Output from Coal India, the world’s largest miner by output, has been falling this year as heavy rains have hampered production at many mines in India’s east. Monsoon rains in India were 10 per cent above average in 2019 – the highest in 25 years – and seasonal rains have continued longer than expected.

The shortage of coal created by the flooding could force the energy hungry nation to boost coal imports this year, at a time when India has been looking to reduce coal shipments to cut its import bill, with coal featuring in the top five commodities imported by India by value.

A video shot by a volunteer at rights group Chhattisgarh Bachao Andolan showed black water gushing down a slope and into the open pit mine. Reuters could not independently authenticate the video.

Coal India said on Tuesday (1) its output for the six months to the end of September fell six per cent, with September production dropping 23.5 per cent to the lowest level in months. It wants to produce 660 million tonnes during the year ending March 2020, up 8.7 per cent from the 606.9 million tonnes it produced in 2018-19.

Coal accounts for about 75 per cent of India’s power generation, and India wants to arrest rising imports. However, the government has failed so far to open the industry to competition, despite passing a liberalisation policy 19 months ago.

India gets about two-third of its imported thermal coal – mainly used for power generation – from Indonesia, and also counts South Africa and the US as key suppliers.