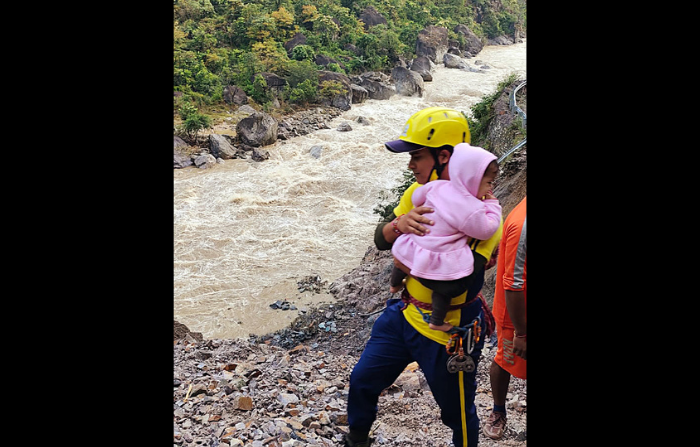 A National Disaster Relief Force personnel carries an infant during the rescue operation of tourists stranded due to floods following heavy rainfall in Nainital in the northern Indian state of Uttarakhand on Wednesday, October 20, 2021. (ANI Photo)

HEAVY flooding and landslide have wreaked havoc in northern India and its Himalayan neighbour of Nepal with the death toll crossing 100. Several families have either been swept away or crushed in their homes by avalanches of rock and mud.

In the state of Uttarakhand in northern India, 46 people died in the last few days while 11 have gone missing. At least 30 were killed in seven separate incidents in the state’s Nainital region on Tuesday (19) following cloudbursts. In another incident, five from the same family died after their house was buried by a massive landslide. The southern state of Kerala was also hit by massive floods that resulted in death of 39 people so far. In Nepal, 31 lives were reportedly lost.

Experts have said that people were victims of ever-increasing unpredictable and extreme weather across South Asia in recent years caused by climate change and worsened by deforestation, putting up of dams and excessive development, AFP reported.

Uttarakhand received more than 178 millimetres of rainfall in the first 18 days of October, which is almost 500 per cent more than the average, Indian daily Hindustan Times reported citing data from the Indian Meteorological Department.

The met office forecast a “significant reduction” in rainfall in the Himalayan state from Wednesday (20).

In Nepal, sources in the disaster management said 43 people were still missing.

“It’s still raining in many places… The death toll could go up further,” Humkala Pandey, an official, said.

In the eastern district of Dhankuta, a landslide buried a house killing six people, of whom three were children. Swelling rivers inundated houses in many districts of the country and properties and crops were destroyed.

Landslides are a regular danger in the Himalayan region but experts warn that they are becoming more frequent because of increasingly erratic rainfall and melting glaciers.

In Kerala also, nature’s fury has wreaked havoc. Heavy rain since October 15 has killed many while thousands have been moved to safer places. Several houses were either destroyed or damaged.

The state has also witnessed a rise in natural disasters, including in 2018 when nearly 500 people died in its worst flooding in a century.

Environmentalists have blamed a rise in extreme weather in the warming Arabian Sea and excessive development work in the Western Ghats mountain range for the destruction, AFP added.