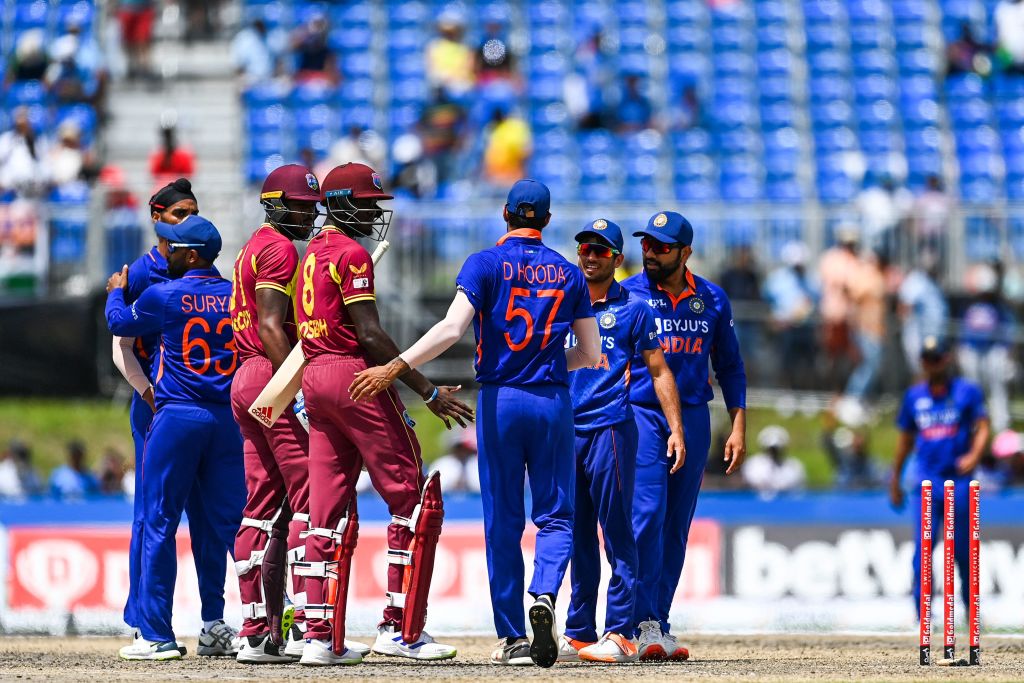 Members of the India team celebrate after winning the fourth T20I match between West Indies and India at the Central Broward Regional Park in Lauderhill, Florida, on August 6, 2022. (Photo by CHANDAN KHANNA/AFP via Getty Images)

India advanced their preparation for the next Twenty20 World Cup with a series-clinching 59-run victory over the West Indies in the fourth fixture of a five-match series at the Broward County Stadium in Florida, US, on Saturday (6).

Defending a formidable total of 191 for five in front of fiercely partisan Indian supporters at the United States venue, Rohit Sharma’s side dismissed their opponents for 132 off 19.1 overs.

India take an unbeatable 3-1 lead in the series ahead of the final match at the same venue on Sunday (7).

Arshdeep Singh led the bowling effort for India, the left-arm medium-pacer continuing to impress with his clever combination of swing and seam to take three for 12, finishing off the match with the wicket of Obed McCoy.

For McCoy, who established a new West Indies bowling record in T20Is with figures of six for 17 in the second match in St Kitts last Monday, this was an especially forgettable experience.

Despite taking two wickets, the left-armer was belted for 66 runs across his four overs, the most expensive spell ever by a West Indies bowler in this format.

India continued with their policy of all-out attack after being put in to bat with Rishabh Pant leading the effort for the top order with 44 off 31 balls.

Each of the top five got starts and while none was able to carry on for a really commanding innings, their pace of scoring ensured the final total was always going to be challenging on a surface where free-flowing strokeplay became increasingly difficult.

“We knew it was not going to be easy because of the conditions,” said Sharma after the match.

“I thought we had a good score on the board but just could not take things for granted. Our bowlers did extremely well to keep making crucial breakthroughs.”

For West Indies captain Nicholas Pooran, the margin of the defeat was just another reminder of the amount of work required by the two-time former champions ahead of the qualifying phase for the T20 World Cup in Australia in October.

His dismissal for 24, run out after carting left-arm spinner Axar Patel for a succession of boundaries, typified West Indian frustration.

“The series may be over as a contest but the final match gives other players a chance to put their hands up ahead of the World T20,” said Pooran in hinting at a number of changes for Sunday’s finale.

“They had gotten off to a flying start batting first but I was really happy at least with the way the bowlers stuck to the task.”