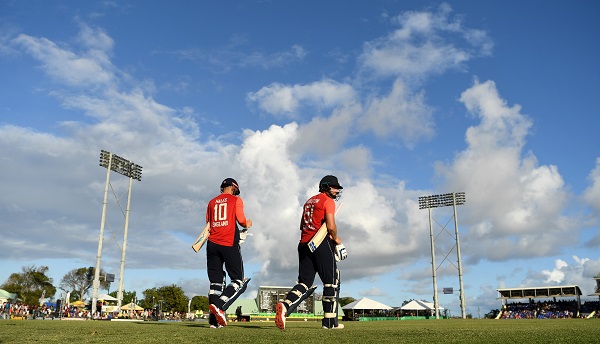 The world’s most popular Twenty20 league ends on May 12, leaving most of the eight teams to rely on their benches as they race toward the play-offs (Photo: Gareth Copley/Getty Images).

ENGLAND’S Jonny Bairstow is leading an exodus of foreign stars from the Indian Premier League (IPL) as the looming World Cup draws top names away for international duty.

Bairstow was out for a duck in his final innings of the season for Sunrisers Hyderabad on Tuesday (23) after being a key player for the franchise with 445 runs in 10 matches in the high-octane Twenty20 competition.

Hyderabad’s batting powerhouse David Warner is also in line to leave the IPL in the next week to team up with his Australia teammates before the 50-over global showpiece in England and Wales, starting on May 30.

The world’s most popular Twenty20 league ends on May 12, leaving most of the eight teams to rely on their benches as they race toward the play-offs.

Senior sports journalist Ayaz Memon believes the glitzy IPL will lose some of its sheen as a result. “It will have a pretty big impact,” Memon said.

“If you look at players like David Warner, Jonny Bairstow, and even some of the West Indies stars like an Andre Russell, it’s going to take away a lot of the lustre and the star value.”

Warner, who leads the IPL batting chart with 574 runs, will be irreplaceable for Hyderabad who have relied on the opener to set up big totals.

The left handed-right handed batting combination of Warner and Bairstow has provided a series of blazing starts, including a record IPL opening stand of 185.

“But this something that was anticipated and all franchises have back-ups in place. It gives a chance to some of the Indian talent to come in and shine,” said Memon.

Hyderabad vice-captain Bhuvneshwar Kumar, who led the side in place of regular skipper Kane Williamson on Tuesday (23), said the team was prepared for the exit of their foreign imports.

“There is no doubt that these guys have done really well but I won’t say (we are) upset. We have got guys who can replace him (Bairstow),” said Kumar.

“But the way he performed, we will miss him.”

The 2008 champions Rajasthan will be one of the worst affected sides, having already lost Jos Buttler for the birth of his first child.

Royals teammates Ben Stokes and Jofra Archer are expected to join England’s preliminary World Cup squad later this week while Australia’s Steve Smith, like Warner, is due at an Australia squad training camp next week in Brisbane.

“We did know that we are going to be losing players. We have got nice replacements,” said Rajasthan coach Paddy Upton.

“We have got Oshane Thomas waiting in the wings should Jofra Archer go.

“If Smith were to go, and Stokes, then we have Ashton Turner. We are quite comfortable that we are not going to be left with big gaping holes, certainly with the foreign internationals,” the South African added.

South Africa are also recalling their stars. “Quinton de Kock and (Kagiso) Rabada both playing for Delhi Capitals are guys who are doing extremely well and will be missed,” said Memon.

Kolkata Knight Riders, whose campaign started strongly but has stuttered of late, may struggle to make the playoffs if standout performer Russell heads home to the Caribbean.