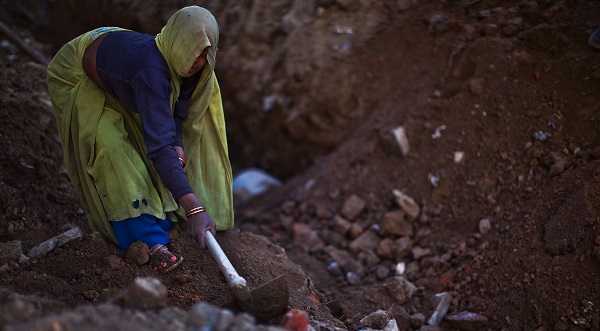 A series of rescues this year have highlighted the plight of the hundreds of pregnant and lactating women working in brick kilns, rice mills and on farms across India, often to pay off debts they did not incur (Photo: Daniel Berehulak/Getty Images).

FIVE months into her pregnancy, Soniya was still carrying heavy sacks up steps at the rice mill in south India where she was forced to work to pay off a family debt. By the time she was rescued, her baby had died.

Soniya spent four years in debt bondage, the most prevalent form of slavery in India, to pay off a family loan of Rs 50,000.

Like many women in her situation, she had no access to health care. Her rescuers said she appeared malnourished, frail and on the point of collapse, had her hands wrapped around her stomach and refused to speak.

“Health checks are not mandated after a rescue, but the lost expression in her eyes suggested that something was amiss,” said Megraj Kasim, the local officer in charge of rescue and rehabilitation of bonded workers.

“We rushed her to a hospital, but it was too late,” he told from Vellore district in the southern state of Tamil Nadu.

A series of rescues this year have highlighted the plight of the hundreds of pregnant and lactating women working in brick kilns, rice mills and on farms across India, often to pay off debts they did not incur.

“The women are silenced into submission by threats, which is why their trauma is often unheard,” said Helen Barnabas, a counsellor with the International Justice Mission, an anti-trafficking charity.

“In almost every rescue, there is at least one pregnant woman or one nursing a newborn, who have been denied medical access, forced to work and gone through trauma that they are rarely able to articulate. The cruelty is unimaginable.”

India’s labour ministry did not respond to emails or calls on the issue.

It says more than 300,000 people have been pulled out of slavery since 1976 and has committed to rescue and rehabilitate more than 10 million bonded labourers by 2030.

Kasim said the testimonies of women who had lost their children were the toughest to record, but gave the “true picture of the extent of exploitation”.

“The women don’t speak easily and we work very hard on gaining their trust,” he said.

“But when they trust you enough to speak, their accounts are heartbreaking. Even the toughest officials are moved by their suffering, especially if they lose a child.”

Kasim has now mandated health checks in all rescues in his region, a move the Tamil Nadu government is looking to enforce across the state in the future.

Barnabas said women from tribal areas were often told to treat themselves like their grandmothers did using traditional herbs, depriving them of access to modern medicine,”

“But the tragedy is that when they lose their child, they often don’t blame the mill owners but themselves and say they have angered their gods and goddesses,” she said.

“It takes them years to understand that it was not their fault.”

Ashtama Devi, 35, spent the last trimester of her pregnancy in the searing heat of a brick kiln in the northern state of Haryana.

She went back to work within 15 days of her delivery, leaving her baby boy in the care of her seven-year-old son in their tin roofed hut next to the brick kiln.

When they were rescued six months later, the child had blisters all over his body that Devi attributed to the intense heat he was exposed to from birth.

“I baked bricks and worked 14 hours every day (during my pregnancy),” said Devi by phone from Delhi after she was rescued last month.

“My employer would beat up my husband when he asked for permission to take me to the doctor.”

She recalled how during her two earlier pregnancies, health workers in her home village ensured she had nutritional supplements and she also received Rs 1,400 cash from the government when she delivered.

In bondage, she had no such care and gave birth to an underweight baby.

Devi, who was lured into bondage with an advance payment of Rs 15,000 and the promise of a better life, was among 80 people rescued last month, 32 of whom were children.

Nirmal Gorana, convener of the National Campaign Committee for Eradication of Bonded Labour – a network of campaigners – said Devi’s baby was severely malnourished when he was rescued and his condition is still critical.

“The children when we reached the site were all visibly weak, had skin diseases and none of them had any clothes on. They were living in the searing heat next to brick kiln under a tin roof shed,” Gorana said.

Manki Devi, who was among those rescued from Haryana, gave birth earlier this month to a baby that died within an hour.

For Soniya, who still believes she is pregnant and is undergoing counselling, the days ahead will be tough, Barnabas said.

“We find that they go through long spells of depression before they really understand what happened,” she said.

“And then the sadness will be replaced by rage.”