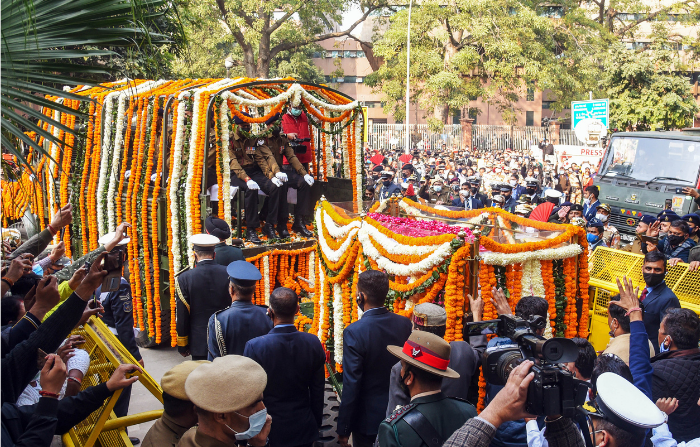 GENERAL Bipin Rawat, India’s first chief of defence staff who died in a helicopter crash along with his wife and 11 personnel in a forest area of the southern Indian state of Tamil Nadu on Wednesday (8), was cremated with full military honours at the Brar Square crematorium in Delhi Cantonment on Friday (10). His wife was also cremated and the last rites were performed by their daughters Kritika and Tarini.

Rawat, who took over as the chief of defence staff in January last year, was accorded a 17-gun salute and Last Post and Rouse was played by tri-service buglers, as per the military protocols.

People from various walks of life joined the Rawats’ funeral procession as it proceeded towards the crematorium to pay the late couple the final tributes.
Indian prime minister Narendra Modi paid his final respects to the Rawats and the 11 personnel at the Palam air base in Delhi after their mortal remains were brought to the Indian capital.

Earlier in the day, Indian defence minister Amit Shah, finance minister Nirmala Sitharaman, health minister Mansukh Mandaviya and other ministers went to the residence of Rawat to pay their respects.

Top opposition leaders such as Rahul Gandhi and Mallikarjun Kharge and those from other parties also laid wreaths on the mortal remains of the Rawats.

Group captain Varun Singh is the lone survivor of the crash and is undergoing treatment at Command Hospital in Bengaluru in Tamil Nadu’s neighbouring state of Karnataka.

Off-course sir, it's the decent thing to do as a soldier.
Again, sorry for your loss sir.

Means: "Don't celebrate the deaths of your enemies as some day friends would also die".

Cash-strapped Britons give up pets as living costs soar