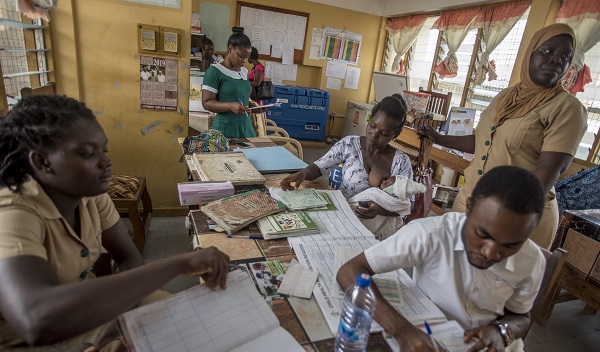 Children are especially at risk, and babies were Ghana’s first vaccine recipients Tuesday in the town of Cape Coast, 150 kilometres (90 miles) west of the capital Accra (Photo: CRISTINA ALDEHUELA/AFP/Getty Images).

GHANA on Tuesday (30) rolled out the world’s only proven malaria vaccine for infants as part of a landmark campaign against the deadly mosquito-borne disease, one week after Malawi became the first country to do so.

Malaria kills hundreds of thousands of people each year, mainly in Africa, and it is hoped a vaccine will bring down the toll.

Children are especially at risk, and babies were Ghana’s first vaccine recipients Tuesday in the town of Cape Coast, 150 kilometres (90 miles) west of the capital Accra.

“I hope this will help us to be able to eliminate malaria, so Ghana can be a malaria-free country,” said Justice Arthur, the doctor running the clinic.

The vaccines will be given to children between the ages of six months and two years, in a project run by Ghana’s health ministry and the World Health Organization (WHO).

“I am really hopeful that the vaccine is going to help me and my family,” said Abigail Aguanyi, a woman waiting to get her child, Blessing, vaccinated. Many of her family members had previously been stricken.

The vaccine, known by its lab initials RTS,S, has passed lengthy scientific trials which found it to be safe and effective at preventing about four in ten cases of malaria in infants the best ever recorded.

To achieve this level of partial protection, four successive doses must be administered on a strict timetable, a challenge for rural Africa.

The rollout in Ghana, Malawi, and soon also Kenya, will seek to evaluate the vaccine’s effectiveness as a complementary tool, augmenting — but not replacing — measures such as insecticide-treated bed nets and the use of sprays.

It will also test the feasibility of administering the four required doses in children in areas of the world with limited access to healthcare.

Data from the programme will inform a WHO policy on the broader use of RTS,S.

Malaria is spread to people by mosquitoes, which transfer the parasite while sucking blood from humans. RTS,S is effective against the Plasmodium falciparum parasite most prevalent in Africa.

In Ghana alone, there were 5.5 million confirmed cases of malaria last year, and many more suspected.

“This is an exciting and long-awaited step forward to fight malaria and its devastating effects on the most vulnerable,” said WHO boss in Ghana, Owen Kaluwa.