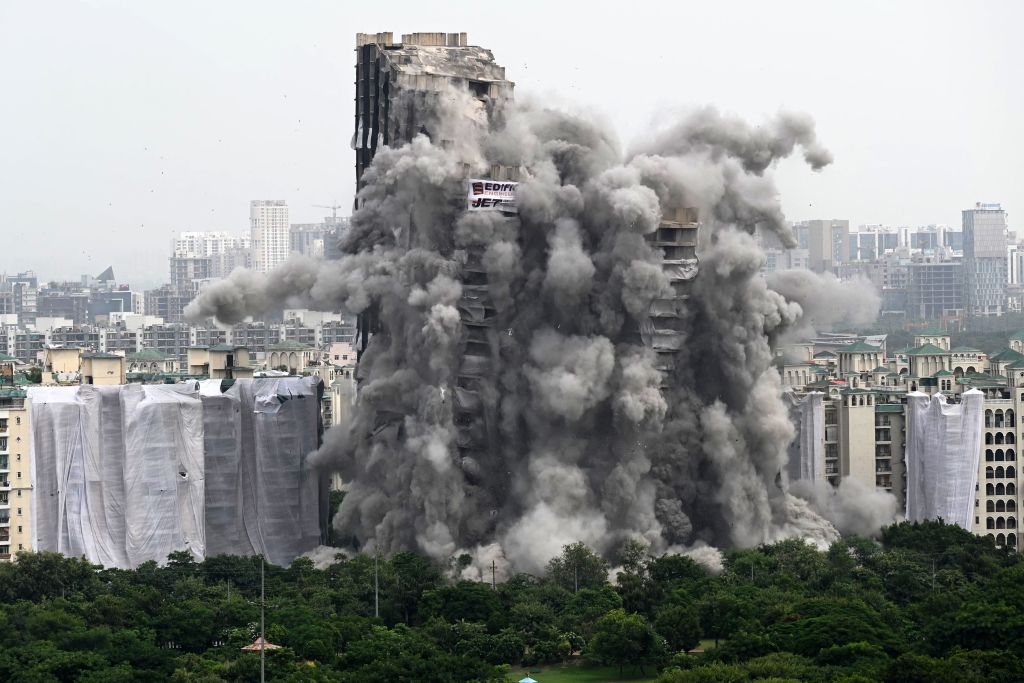 A controlled implosion demolishes the 100-metre-high residential “Twin Towers” in Noida on the outskirts of New Delhi, on August 28, 2022. (Photo by SAJJAD HUSSAIN/AFP via Getty Images)

The Supertech twin towers in Noida came crashing down within a span of nearly nine seconds after the use of 3,700 kg explosives on Sunday (28), thus ending a nine-year-long legal battle.

The towers, Apex (32 floors) and Ceyane (29 floors), which are taller than the Qutub Minar in the national capital, were 100 metres tall and were brought down with explosives weighing at least 3,700 kg, in the biggest ever planned tower demolition bid. Soon after the explosion that took place at the press of a button, the towers came crashing down, generating a cloud of massive dust and thus polluting the atmosphere around.

However, the Environment Department of the Uttar Pradesh government has installed six Special dust machines at the demolition site to monitor pollution levels.

“Pollution levels will be recorded before, during and after the explosion. The amount of PM 10 and PM 2.5 will be checked through this machine. Its report will come in the next 24 hours,” said a technician, Umesh.

A family which lives in Emerald Court Society has vacated their flat and shifted to Parsavanath Village. Himanshu, a resident, said that they have been assured that they can shift by evening, but all are prepared for one or two days.

The demolition of the Apex (32 storeys) and Ceyane (29 storeys) towers would have left behind about 35,000 cubic metres of debris that would take at least three months to be cleared.

The demolition was the centre of attraction nationwide as it was reported extensively for many months.

Taking precautionary measures, the hospitals near Sector 93A have made preparations to render emergency medical services should the need arise.

“We at Jaypee Hospital sector 128 Noida are completely ready for tomorrow’s demolition. We have dedicated eight emergency department beds and 12 ICU beds for tomorrow. Also, one ACLS ambulance equipped with all the necessary medications and equipment will be on standby for any mishappening,” said a statement issued by the Jaypee Hospitals on Saturday which are nearest to the area where the demolition took place.

It further said that a group of doctors including emergency department physicians, critical care specialists, orthopaedic surgeons and neurosurgeons are available in the hospital to handle the situation.

Felix Hospital is also on high alert as doctors, paramedics, and nurses all are fully prepared for any emergency situation. The hospital is just 4 km away from the demolition spot.

“The general ward is ready on the 12th floor of the hospital for an emergency, while ICU beds have been fully prepared on the seventh floor. There are arrangements of a total of 50 beds in the hospitals that includes emergency wards, ICU, NICU, cardiac wards and general wards,” said Dr DK Gupta, Chairman of Felix Hospital.

The Supreme Court had given a go-ahead for the demolition of the towers, which it had set for August 21, but was extended to August 28 at the Noida Authority’s request.

As the story of India’s largest demolition process ended on Sunday, it is time to take a look at the complete timeline from its rise to fall.

The story began after a plot was allotted to Supertech Ltd in 2004 by the New Okhla Industrial Development Authority (NOIDA) for the development of a housing society which came to be known as Emerald Court.

In June 2006, the company received additional land for the construction with the terms being the same. The plan was revised. According to the new plan, two more towers had to come up, in which the garden was scrapped.

In 2009, the final plan was the construction of two towers Apex and Ceyane with 40 floors each while the plan was yet to be approved.

In 2011, the Residents Welfare Association filed a petition in the Allahabad High Court. It was alleged that the UP Apartment Owners Act, 2010 was breached during the construction of the towers. The homeowners claimed that the two towers had less than 16 metres of distance between them which was in violation of the law. The original space designated for the garden in the original plan was allegedly used to erect the twin towers.

In 2012, the Authority approved the new plan proposed in 2009, ahead of the commencement of hearing in the Allahabad High Court.

In April 2014, the Allahabad High Court delivered the judgment in favour of the RWA while also passing an order to demolish the twin towers. It asked Supertech to demolish the towers at its own expense and also refund the money of the homebuyers along with 14 per cent interest.

In May 2014, the Noida Authority and Supertech moved to the Supreme Court stating that the construction of the twin towers was according to the regulations.

In August 2021, however, the Supreme Court affirmed the order of the Allahabad High Court and ordered to demolish the towers while also stating that the construction had been made in violation of the regulations.

The Supreme Court has said that the date of demolition may be confirmed as August 28, with a “bandwidth of seven days” between August 29 to September 4, to take into account any marginal delay on account of technical reasons or weather conditions.
The twin towers were finally demolished on August 28, 2022.

However, the health impact of the resulting dust on residents will be minimal as experts overseeing the demolition will take steps to control the impact.

Dr Mrinal Sircar, Head Pulmonology and Critical Care, Fortis Noida said, “When you demolish a big structure like that, there will be dust and there would be some smoke because you are using explosives. So, the direction of the air matters. The direction of the wind should also be taken into consideration. Demolishing like this or rather an explosion happening in the open air is much safer than say underground mines.”

Dr Sircar said that if this was something underground, where it won’t get dissipated, in such scenarios like underground mines, and explosions, they use various exhaust techniques.

“The dust and gases will get diluted in the air and will get dispersed. The experts who are involved in such big demolitions will take care of all these things,” Dr Sircar said.

A day before the demolition of the Supertech Twin Towers in Noida which are taller than the Qutub Minar, the Project Manager of the team deployed for the task assured the nearby residents to have faith in them and said that the best team was working to ensure a safe demolition.

“I understand the concern of the nearby people here, but I would like to give the message to them that please don’t be afraid. The best team in the world is working on the project,” said Jigar Chedda, Project Manager, Edifice Engineering, on Saturday while expressing hope for everything to go well during the demolition of the Supertech Twin Towers in Sector 93A, Noida.

“The Noida authorities have issued guidelines for the neighbouring people as they are very clear about what the people have to do, when they need to leave and come back, and what all precautions we are taking, the nearby residents are aware of everything,” he added.

The Twitter reacted over the incident in funny says:

Don't be proud of the height, it doesn't take even 10 seconds to fall.

Noida twin towers in India come crashing down after use of 3,700 kg explosives.