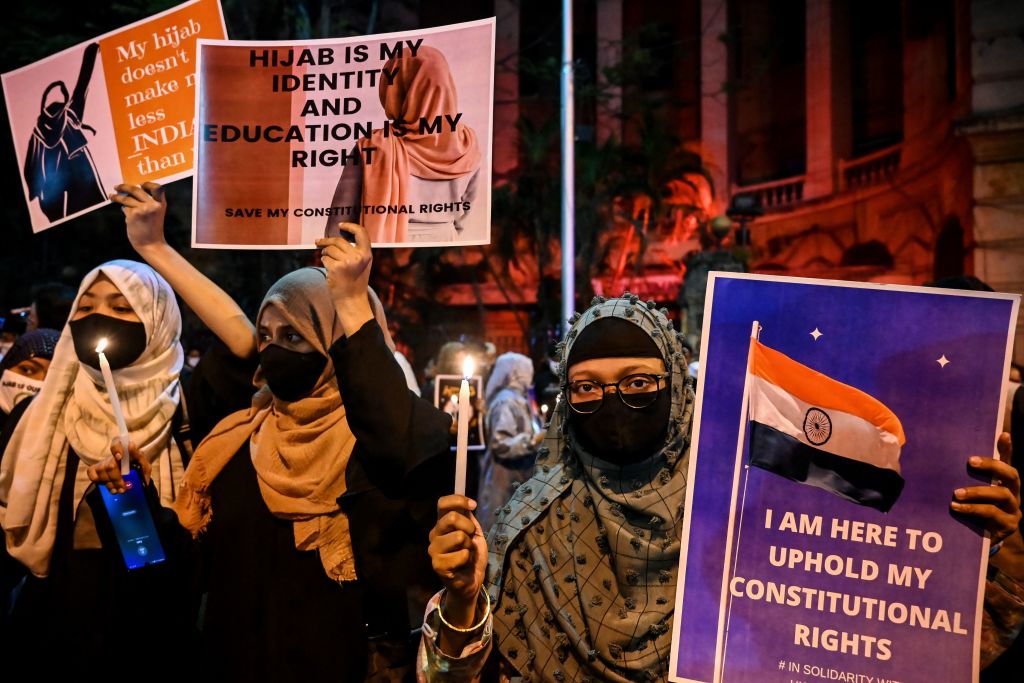 Muslim women protest over the ban of hijab in the southern state of Karnataka in Kolkata in the eastern Indian state of West Bengal on February 11, 2022. (Photo by DIBYANGSHU SARKAR/AFP via Getty Images)

PARENTS of six girl students from the Muslim community in the southern Indian state of Karnataka have filed a complaint with the police alleging the personal details of their daughters were shared on social media.

The incident has happened amid the snowballing controversy over wearing hijab in some schools and colleges in the state’s Udupi district. The six girls were among those who protested the ban on the headscarves in classrooms.

The parents, who submitted their complaint to the Udupi district police chief N Vishnuvardhan, feared that their children’s details might be misused to threaten them. They demanded action against those who allegedly leaked the information about the girls.

Indian government is with each victim Muslim woman: Modi

As per the complaint, personal details of the girls, including their phone numbers, were revealed in public.

The Press Trust of India cited Vishnuvardhan as saying that documentary proof of the information available online has been sought from the girls’ parents and appropriate action will be initiated when it is received.

The girls protested the decision to ban hijab and stop them from entering the premises of the educational institutions. Soon there was standoff between the students and the college authorities and the judiciary had to intervene as the matter escalated.

On Thursday (10), a three-judge bench of the Karnataka High court hearing the hijab issue, asked the students not to insist on wearing any cloth on campuses of educational institutions till the verdict came out.

On Friday (11), the Supreme Court of India said it will protect the constitutional rights of every citizen and take up at an “appropriate time” the pleas challenging the direction of the state high court asking the students not to wear any religious cloth in educational institutions till it reaches a verdict.