HILARIOUS! Watch how Virat Kohli reacts after winning an unusual award after 3rd T20 vs Australia 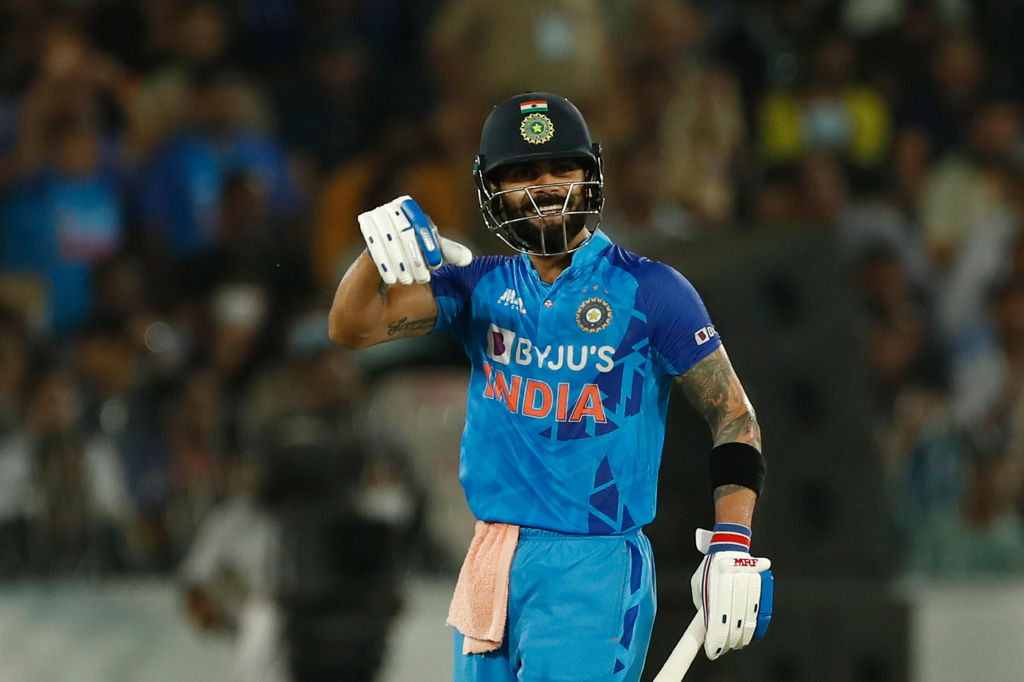 Virat Kohli of India reacts during game three of the T20 International series between India and Australia at Rajiv Gandhi International Stadium on September 25, 2022 in Hyderabad, India. (Photo by Pankaj Nangia/Getty Images)

India batter Virat Kohli on Sunday (25) played a crucial knock against T20 world champions Australia in the third match of the just concluded series at home to help his team clinch the series 2-1 after losing the first match. His 48-ball 63 saw India overcoming a challenging situation to eventually reach home with a ball to spare.

However, Kohli was not chosen as either the player of the match, an award that went to Suryakumar Yadav who also hit a scintillating half-century in the match and added 104 runs with the senior batter at a crucial juncture, or the player of the series for which spinner-all-rounder Axar Patel was picked. Yet, he was seen making a bizarre celebration after picking an award.

What was it about?

The 33-year-old Kohli, who is one of the fittest players in the Indian side, received the ‘Energetic Player of the Match’ award and made a funny sprint back to his teammates to perhaps suggest that he is never short of energy. He was also seen having a laugh with Australia cricketer Glenn Maxwell, who he plays alongside for Royal Challengers Bangalore in the Indian Premier League.

No wonder he is the " energetic player of the series " 😂😂pic.twitter.com/Bi3SJkQk2b

Speaking after the game, Kohli said he has been enjoying his game since returning to the side from the break.

“I have to utilise my experience and had to take down Zampa. I looked at the dugout and both Rahul and Rohit asked me to continue batting,” said Kohli.

“I have enjoyed batting ever since I came back. Today also I was an hour and a half before the team. I am excited and happy with my contributions. Just trying to place in safe space,” he added.

Kohli returned to form in the Asia Cup held in the UAE recently where he blasted a century, his 71st international ton, against Afghanistan besides a couple of half-centuries against Hong Kong and Pakistan.