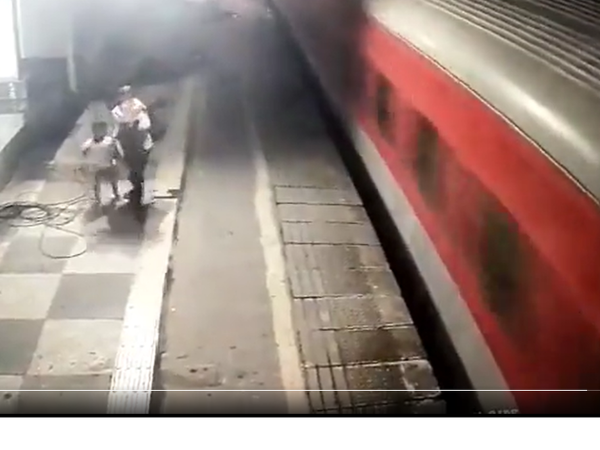 A man flees a railway station with two minors after pushing his wife in front of a speeding train in Vasai near Mumbai in Maharashtra on August 22, 2022. (Picture: Twitter screengrab)

A man pushed his wife in front of a speeding train in Vasai near Mumbai, the capital of the western Indian state of Maharashtra, and fled with two minor kids. He was arrested by the government railway police in Bhiwandi, located around 35 kilometres from Vasai, within a day and booked for murder.

Sources in the railway police said the motive behind the heinous act was the man’s doubt on the character of his wife who died on the spot. The accused reportedly said that he had evidence that pushed him to commit the act.

The police said the couple’s kids — aged five and two-and-half — were sent to a children’s welfare home and their relatives were being contacted.

The shocking incident happened around 4.10 am on Monday (22) when the woman was sleeping on platform No.5 of Vasai railway station along with the two kids. The man, who was around, woke up his wife and took her to the edge of the platform and pushed her in front of a fast approaching train.

shocking video has emerged of a woman sleeping on the platform at Vasai railway station being pushed down by her husband. @saamTVnews @SaamanaOnline @ANI @AmhiDombivlikar @zee24taasnews @ pic.twitter.com/q0OrFTlePg

The railway police got into action as soon as they got the CCTV footage of the act and deployed six teams to track the accused. He was finally caught at his residence in Bhiwandi on Tuesday (23), they said.

The police said the accused used to have frequent arguments with his late wife suspecting that she had extra marital affair.

“The reason why the family was at Vasai railway station that day is still under investigation, however according to the accused, the wife was trying to leave the house,” added the GRP.

The accused was produced in the court on Wednesday (24), the police said.