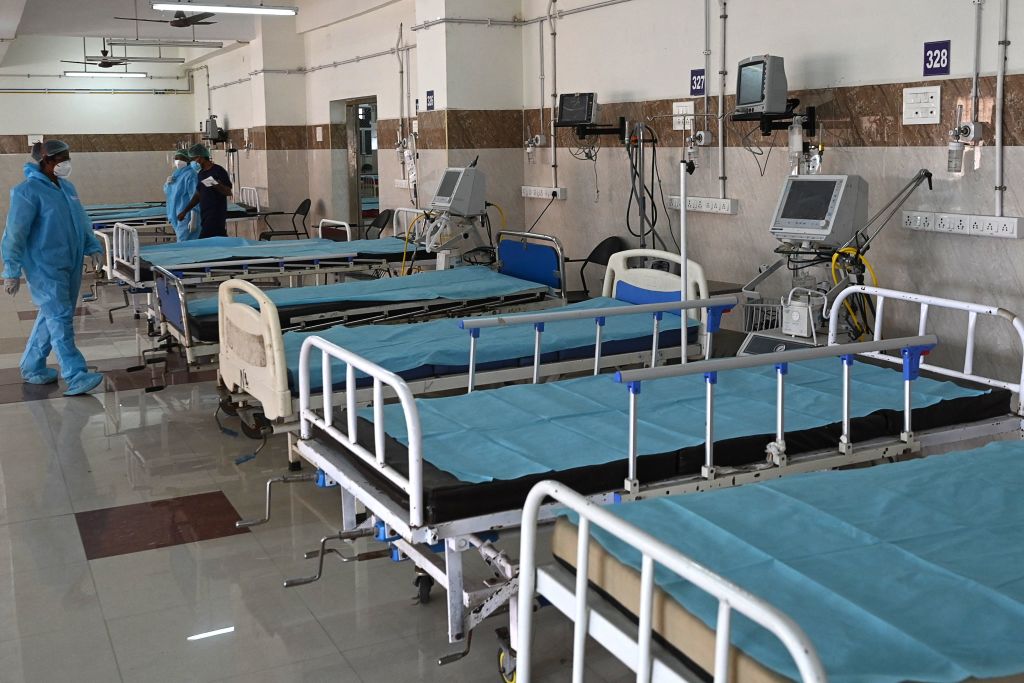 Medical staff members prepare an isolation ward for Covid-19 coronavirus patients at a government hospital in Chennai in the southern Indian state of Tamil Nadu. (Photo by ARUN SANKAR/AFP via Getty Images)

MAJOR cities in India, including Kolkata, Mumbai and Delhi have seen a surge in Covid-19 cases but the rate of hospitalisation is less. That, however, has done little in allaying fears over a possible spread of the pandemic in the rural areas in the coming days.

India on Thursday (6) reported more than 90,000 new daily Covid-19 cases, up almost four times since the beginning of the new year, and they have been recorded mostly in cities where health officials say the Omicron variant has overtaken Delta, Reuters reported.

Most of those infected by the virus have shown zero or mild symptoms and have recovered at home fast, officials said.

On Wednesday (5), the Indian health ministry identified big cities such as Delhi, Mumbai, Kolkata, Chennai and Bengaluru as some of the main regions of concern over the spread. State officials are concerned that the infection will soon spread to the countryside where health facilities are less than developed.

Kolkata, a city of 15 million residents in the eastern state of West Bengal, accounted for half of the new cases till a few days ago. But the cases are now fast rising in the neighbouring districts. The populous state has now reported one of the highest rates of infection in the country.

“We are watching the situation in the districts and rural belts where the numbers are also growing,” Ajay Chakraborty, director of the West Bengal health services who has isolated himself at home after contracting the virus, told Reuters.

Many Covid-19 beds in hospitals in Kolkata are still empty, Chakraborty said. In a government-run hospital in the city, only 75 admissions were reported on Tuesday even though there were more than 9,000 fresh cases, the official said.

In Mumbai, India’s Maximum City, a new daily infection peak of 15,166 was recorded on Wednesday, which is more than its previous high of just more than 11,000 hit last year. Nearly 90 per cent of the new patients showed no symptoms while only eight per cent were hospitalised, city officials informed in a daily health bulletin, the Reuters report added.

The Covid-19 cases in Delhi nearly doubled in a day to more than 10,000 on the same day but the city authorities said only seven per cent of its Covid beds were occupied.

The central health officials, however, said even a large number of mild cases could overwhelm the country’s health system which came under serious pressure during the devastating second wave that wreaked havoc earlier in 2021.

India logged at least 2,135 Omicron cases and one death linked to the variant. The victim was an elderly man with medical conditions in the western state of Rajasthan.