I am Impressed By Priyanka Gandhi’s Simplicity: Vijender Singh 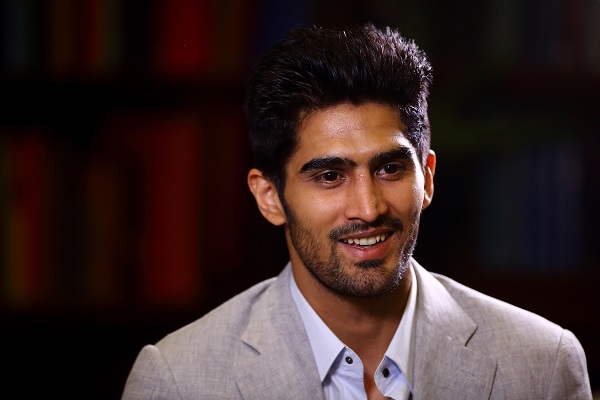 “There is no competition with the candidates. I will put forth my thing and won’t lie. I am the son of a bus driver who belongs to a family of farmers. I started from zero and have only now started staying in Vasant Kunj,” he said (Photo: Jordan Mansfield/Getty Images).

TERMING India’s Priyanka Gandhi Vadra as his ideal, country’s boxer-turned-politician Vijender Singh has said he is impressed by the simplicity of the Congress general secretary in whom he sees glimpses of her grandmother Indira Gandhi.

Singh, who will be making his electoral debut from south Delhi Lok Sabha constituency in Delhi as a Congress candidate termed his rivals – BJP’s old-timer Ramesh Bidhuri as “not a good person’ and Aam Aadmi Party’s (AAP) Raghav Chadha a ‘bachcha’.

Singh said he idolises Priyanka Gandhi and admires her simplicity.

“I like Priyankaji and her simplicity. The way she walks, the way she talks, there is a reflection of Indira Gandhiji. She has impressed me,” he said.

The boxer-turned-politician said there is no competition with other candidates and said he will not lie to the people.

“There is no competition with the candidates. I will put forth my thing and won’t lie. I am the son of a bus driver who belongs to a family of farmers. I started from zero and have only now started staying in Vasant Kunj,” he said.

Talking about his rival candidates he said, “People do not like the current MP (Bidhuri) since he is a bad person. Rahi baat us bachche ki (referring to Chadha), I don’t know about him.
“People are fed up with Arvind Kejriwal and his false promises. They could have done so much for the poor but they were involved in ‘dharna’ politics from AC rooms.”

He attacked the AAP and said it is in a “bad condition” and was after the Congress for an alliance.     The 33-year-old pugilist said the AAP had promised that school education would be made state of the art and there would be clean water but students did not have school to go after Class 8 and “everybody knows the cost of water tankers”.

“The Congress had gone down after AAP emerged in Delhi but now we have several youngsters who are with the party and the party has formed a team and regrouped. In Delhi, we have Sheila Dikshit at the helm and we are confident,” he said.

While Singh might be a debutant, he said he is aware about the issues in his constituency and said his endeavour will be to end the “atmosphere of fear” prevailing in the constituency, which holds an important place in the power centre of Delhi.

It has also been represented by the likes of veteran leaders like Sushma Swaraj and Madan Lal Khurana.  “Every constituency has different problems. South Delhi is facing the issues of illegal construction, encroachment and sealing. Small businessmen are being illegally targeted and their properties are being encroached upon.

“The middle class is scared of the current government and there is an atmosphere of fear. I want to end that atmosphere of fear and also ensure wherever sports facilities are needed, they are provided there,” he said.

Singh, who belongs to Haryana, said Delhi needs him while asserting that he wants a “good future for his family which stays in south Delhi”.

Singh, who has received offers for joining politics earlier also, said he joined the Congress since he agreed with their ideology as it focused on the youth.

“You go there where your thoughts match and there is no point in being somewhere which you do not connect to. I was busy with my fights but I was in touch with Modiji, Priyankaji and Rahulji. I chose Congress because it talks for the youth and their issues like employment,” Singh said.

He said the party does not talk about “fake nationalism” and does not indulge in “jhooth ki rajneeti” which is at all-time high currently.

Singh said there was no Modi wave this time and said the common man was concerned about issues and not the fact about what was done to Pakistan.

“There is no Modi wave. You might feel there is a Modi wave because of the big banners and hoarding everywhere which show a smiling face but if you look at that face closely, the reality will be different,” he said.

Singh, who is a youth icon, said he will reach out to youngsters through social media and said the doors of his house will always be open for people.