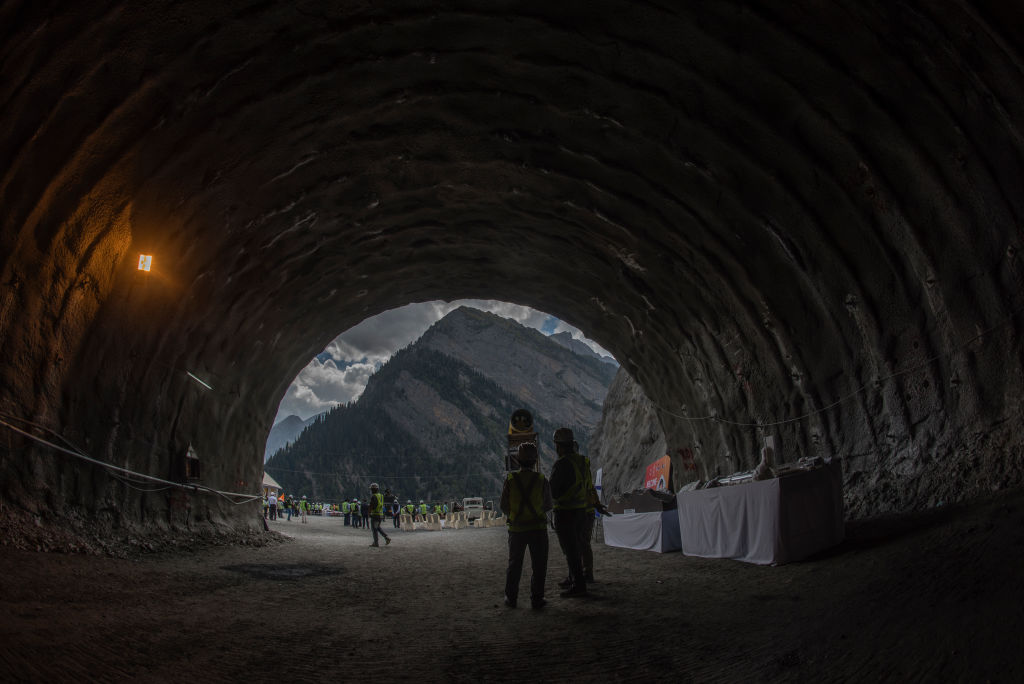 Engineers, workers and media persons inspect the under-construction Zojila tunnel which will connect Kashmir with Ladakh on September 28, 2021 in Baltal, 62 miles east of Srinagar, the capital of Jammu and Kashmir. (Photo by Yawar Nazir/Getty Images)

WITH challenge to its security in the Jammu and Kashmir region mounting every day, thanks to the presence of two hostile neighbours in Pakistan and China, India has focused on an ambitious project to drill tunnels and construct bridges to connect the Kashmir Valley with Ladakh, a cold desert which is strategically key.

ABC News cited officials as saying that a tunnel measuring four miles – the first of the four in the project – is already complete and it will, for the first time, make the resort town of Sonamarg accessible during the winter months.

Sonamarg marks the end point of conifer-clad mountains before Ladakh begins across the Zozila mountain pass. The final tunnel of the project worth $932 million (£685 million), which is about 8.6 miles long, will bypass the rocky pass and connect Sonamarg with Ladakh.

According to the officials, this tunnel will be India’s longest and highest at 3,485 metres.

India has undertaken the project at a time when its soldiers have locked horns with the Chinese troops in a violent standoff in the Karakoram mountains in Ladakh for almost a year and half, along the de-facto border called the Line of Actual Control.

Both nations, which fought a war in 1962 over their Himalayan borders, have stationed several thousands of soldiers in the zone, backed by artillery, tanks and fighter planes.

According to India’s military planners and strategists, the tunnel holds a key significance for Ladakh. Experts say it will give the military a logistical flexibility and operational and strategic mobility.

ABC News added that the Zojila part of the tunnel will be operational in 2026 but India’s road transport and highways minister Nitin Gadkari said after paying a visit to the site last week that he hoped the work would be finished before the national elections of 2024.

“It’s a challenge I know, but I’m confident they can do it on time,” Mr Gadkari said, adding, “Obviously, we would want it to be finished before the elections.”