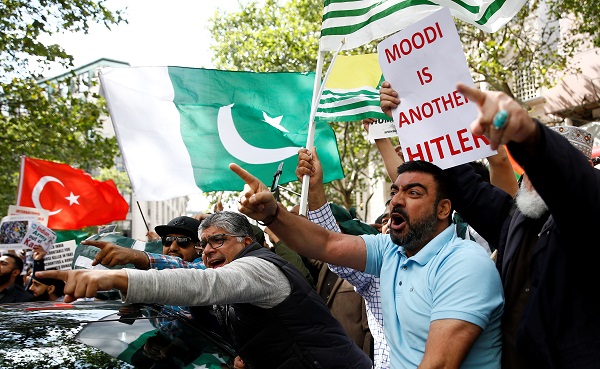 Demonstrators protest against the scrapping of the special constitutional status in Kashmir by the Indian government, outside the Indian High Commission in London, Britain (REUTERS/Henry Nicholls).

INDIAN authorities on Wednesday (4) have conveyed their deep concern to the UK over the violent protests led by pro-Pakistani groups that caused damage to the Indian high commission building in London.

The South Asian country raised its concerns with Britain after violent protests by “Pakistan-incited elements” vandalised the country’s high commission for a second time in 30 days on Tuesday (3).

Yesterday’s protest was the second such occurrence on the premises of Indian high commission after August 15, when India’s independence day celebration was marred with violent demonstrations.

Some 2,500 pro-Pakistani, Khalistani protesters, most of them of Pakistani and Kashmiri origin, held the ‘Kashmir Freedom March’ from Parliament Square to the Indian high commission.

India’s external affairs ministry spokesperson Raveesh Kumar said: “We consider these incidents to be unacceptable and have strongly urged the government of UK to take action against those involved, and take the necessary steps to ensure normal functioning of our mission and the safety and security of our personnel.”

The incident had affected the security and normal functioning of the Indian mission in the UK, Kumar noted.

The embassy also tweeted a picture of a cracked window pane in the building.