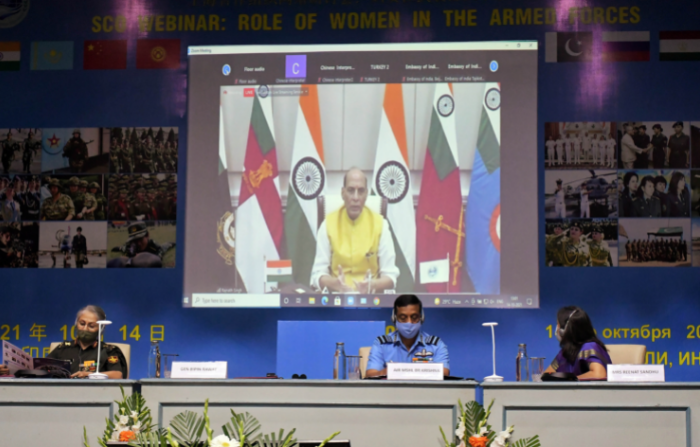 INDIAN defence minister Rajnath Singh on Thursday (14) said while delivering the inaugural address at the Shanghai Cooperation Organisation (SCO) webinar on ‘Role of Women in Armed Forces’ said the Narendra Modi government has taken many steps to strengthen the role of women within the security set-up in general and the armed forces in particular.

Singh said that the women have been serving in the Indian Military Nursing Service with pride for more than a century now. A statement from India’s defence ministry said the country’s army had commenced commissioning women officers in 1992.

“It has now moved to induct women officers in most of the branches of the Army. Women are now being accepted for permanent commission and shall be commanding army units and battalions in near future,” Singh said.

The webinar was hosted by headquarters, Integrated Defense Staff in the defence ministry.

While pointing out the induction of women in Military Police started last year, Singh said the women will be able to join the National Defence Academy, the premier tri-service training institute, from the next year. He also hoped to see women officers from the SCO nations in the Officer Training Academy in the city of Chennai in the southern Indian state of Tamil Nadu.

The defence minister also said that women were inducted in both support and combat roles in the Indian Navy. They have also been piloting maritime reconnaissance planes and since last year, were also being appointed onboard warships.

He said that the Indian government’s approach to the induction of women in the armed forces has been progressive. “We have taken the evolutionary path of moving from support to combat support and thereafter to combat arms within the armed forces,” he said.