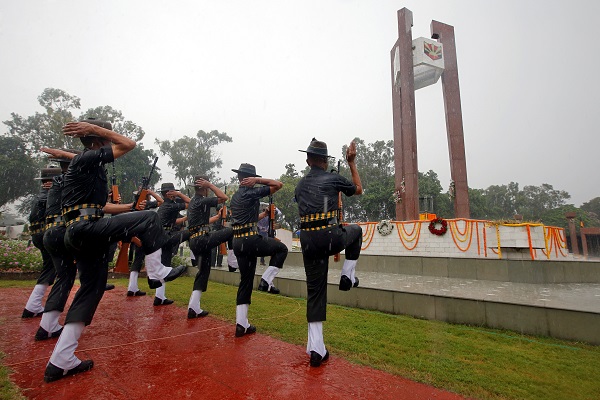 INDIA on Friday (26) commemorated 20 years of its victory over Pakistan in the Kargil War, saluting the supreme sacrifices and valour of the fallen heroes in recapturing several mountain heights seized by Pakistani intruders in Kashmir.

It was on July 26, 1999, Indian Army had declared successful culmination of ‘Operation Vijay’, declaring a victory after nearly three-month-long battles on the icy heights of Kargil. India had lost around 500 soldiers in the war.

President Ram Nath Kovind, prime minister Narendra Modi, Defence Minister Rajnath Singh led the nation in paying tributes to the Kargil heroes, extolling the courage, bravery and dedication of the soldiers who were part of the operation.

Singh said the “unwavering courage and supreme sacrifice” of the Kargil martyrs ensured the safety and sanctity of India’s borders.

President Kovind was scheduled to participate in the function in Dras but bad weather prevented him from reaching the venue. He paid respects to the fallen soldiers at the Army’s 15 Corps headquarters in Kashmir’s Badami Bagh cantonment.

“July 26 is immortalised as ‘Kargil Vijay Diwas’ and represents a saga of glorious victory of the nation in the Kargil conflict fought from May-July in 1999.

Indian Army soldiers fought legendary battles in Dras, Kaksar, Batalik and Turtok Sectors. We salute the courage, valour and sacrifices of our martyrs and heroes,” the Army said in a statement.

The Indian Army responded to the intrusion with ‘Operation Vijay’, fighting battles on rugged terrains and difficult peaks.

The Indian Air Force had joined the operation with their ‘Operation Safed Sagar’ under which, the IAF for the first time used high-precision bombs to target the enemy.

The Mirage-2000 aircraft played a crucial role in the battles fought during the war and also hit enemy targets bunkered in at the Tiger Hill, besides tasting success at Muntho Dhalo in June 1999.

“Mirage-2000 was the game changer in the Kargil War. It skewed the asymmetry of the military assets in our favour,” senior IAF officer, Gp Capt Anupam Banerjee told.

Banerjee, who flew several sorties during the war, said, Mirage-2000 made a big difference for India.   A number of events were organised by the Army in the run-up to Kargil Vijay Diwas, including one at the Gwalior Air Base on June 24, when the base was virtually turned into a theatre of conflict with a dramatic reenactment of some milestones of the 1999 operation.

Air Marshal B S Dhanoa, who was the commanding officer of the 17 Squadron at the time of the war, said deploying Mirage-2000 jets and air support to ground forces had turned the tide of the 1999 war in favour of India.

“Tiger Hill was also a message at that particular time that no matter how small you are, no mater how precariously you are positioned, we will be able to get you and hit you,” Dhanoa said.

The Parliament also paid tributes to the Kargil heroes.

In brief remarks in Lok Sabha, Defence Minister Singh said Pakistan can fight neither a full-fledged war nor a limited one with India and is waging a proxy war.

The IAF on Friday paid their homage with a special video showing glimpses of its operations during the 1999 conflict.

With taglines like ‘Valour Unhindered’, ‘Determination Unmoved’ and ‘Courage Unparalleled’, the Air Force prides itself as the ‘Keeper of the Blue Skies’ and always ‘ready for whatever it takes’.