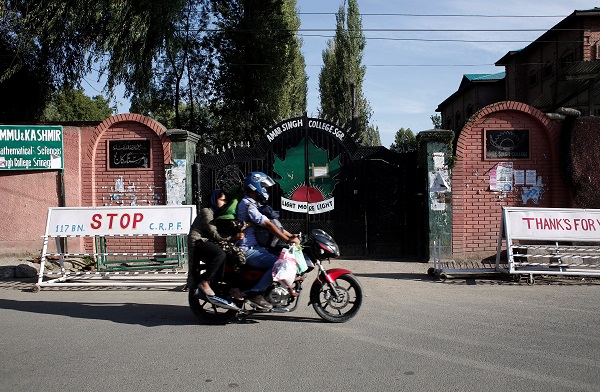 The 106 central laws would come into full force in the state from October 31, 2019. During the transition period, both central as well as the state laws will be in force till October 30 (REUTERS/Adnan Abidi).

THE Indian government may soon come out with a package worth billions of rupees to set up necessary infrastructure for implementing over 100 federal laws in Jammu and Kashmir after abrogation of the special status to the state earlier this month.

The 106 central laws would come into full force in the state from October 31, 2019. During the transition period, both central as well as the state laws will be in force till October 30.
“The central government is working on a special package for Jammu and Kashmir, which involves investment of crores of rupees for complete switchover to central laws in the state from October 31, 2019,” a source said.

“Last week, Union Law Minister Ravi Shankar Prasad had a meeting with over a dozen ministers from important ministries like labour, power, renewable energy and human resources development, for assessment of projects and fund required for effective implementation of central laws in the reorganised Jammu & Kashmir,” the source added.

However, an exact amount of the package, based on the proposals given by various ministries, is yet to be calculated, the source said.

The proposal would soon be sent to the Expenditure Finance Committee and may also be vetted by the Union Cabinet before public announcement.

Among other proposals, the labour ministry has proposed to build a new hospital by Employees State Insurance Corporation for providing health facilities to its subscribers in the state.

The ESI Act 1948 was implemented in Jammu and Kashmir in 1970 and health insurance scheme under the Act was launched from September 1971.

The central government would also have to shell out billions of rupees for implementation of The Right of Children to Free and Compulsory Education Act, 2009.

It provides that every child has a right to full time elementary education of satisfactory and equitable quality in a formal school, which satisfies certain essential norms and standards.
The central government would also implement Aadhaar (Targeted Delivery of Financial and Other Subsidies, Benefits and Services) Act, 2016 for the direct transfer of various benefits and subsidies to the people in the state.

On August 5, the government abrogated the provisions of Article 370 of the Constitution, which gave a special status to the state, and bifurcated it into two Union Territories — Jammu and Kashmir, and Ladakh.