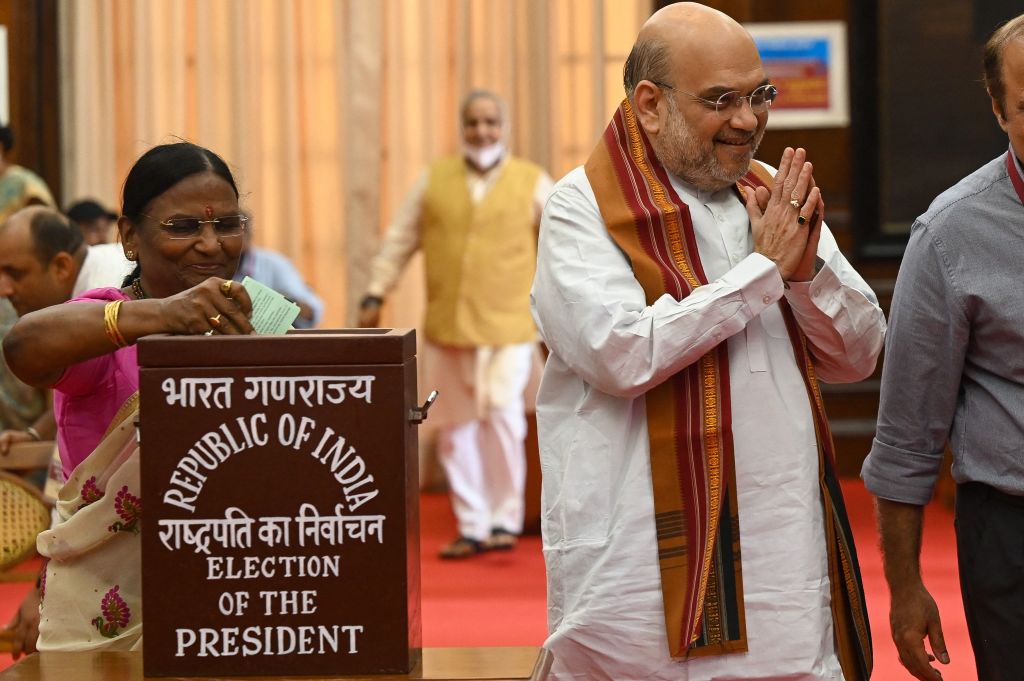 Indian home minister Amit Shah gestures after voting to elect the next Indian president at the Parliament House in New Delhi on Monday, July 18, 2022. (Photo by PRAKASH SINGH/AFP via Getty Images)

INDIA’S parliament began voting Monday (18) for a new president, with a female politician from the country’s marginalised tribal community the favourite for the post.

Droupadi Murmu, from the Santhal tribe, has been nominated by Prime Minister Narendra Modi’s ruling Bharatiya Janata Party for the largely ceremonial position.

If elected, she would be India’s first tribal president and second female president. The incumbent, Ram Nath Kovind, is the country’s second president from the Dalit community, the bottom of the Hindu caste system.

Murmu, 64, began her career as a schoolteacher in the eastern state of Odisha before going into politics. She has held ministerial positions in the state government, and been governor of the neighbouring state of Jharkhand.

Murmu “has devoted her life to serving society and empowering the poor, downtrodden as well as the marginalised,” Modi tweeted after her candidacy was announced.

Her main opponent for the presidency is veteran politician Yashwant Sinha, an ex-BJP member and former finance and external affairs minister, who has been backed by opposition parties including Congress.

He is now a vocal critic of Modi’s government and tweeted at the weekend: “This year the Presidential election is not a contest between two individuals but two ideologies.

“Only one side wants to protect the provisions & values enshrined in our Constitution.”

India’s president is chosen by nearly 5,000 elected members of both houses of parliament and regional legislatures across the country.

Each of their votes is weighted according to the size of their constituency, and they rank the candidates in order of preference.

If no-one has more than 50 percent support, the lowest-scoring candidate is eliminated and their votes redistributed until someone reaches the mark.

The result will be announced later this week.

India’s prime minister wields executive power, but the president can send back a few parliamentary bills for reconsideration.

The president also plays a guiding role in the process of forming governments.