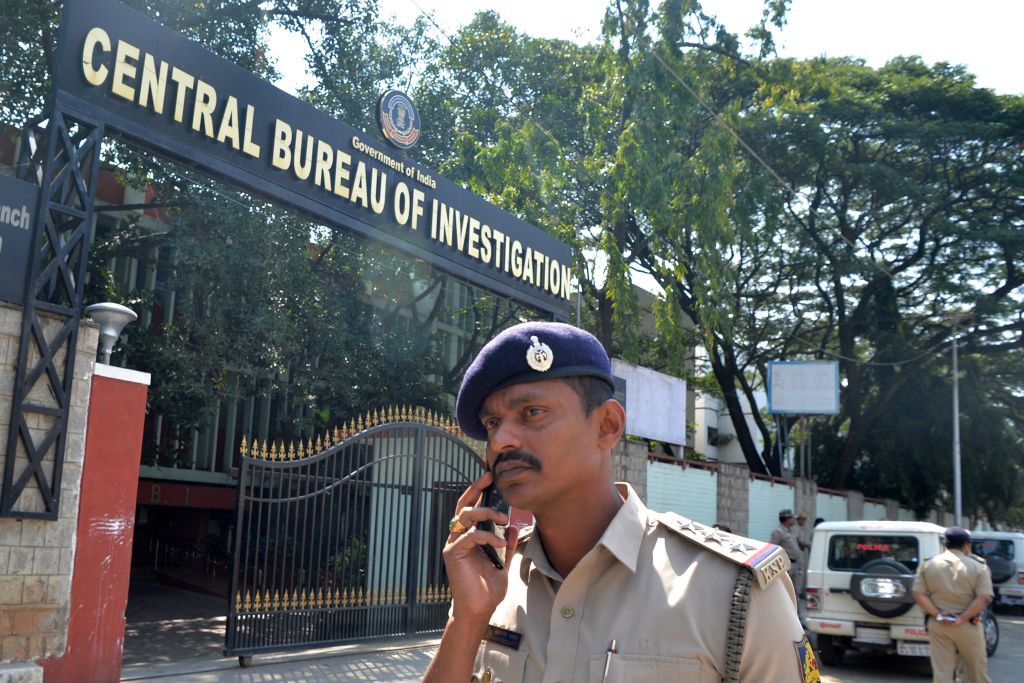 An Indian police officer speaks on the phone in front of a Central Bureau of Investigation office. (Photo by MANJUNATH KIRAN/AFP via Getty Images)

The agency also took into custody a builder, Sisir Kumar Das, who was paid from the bribe money an advance for a property purchased by chief mechanical engineer of the port trust Saroj Kumar Das, the main accused in the case arrested by the CBI, they said.

Saroj Kumar Das had allegedly demanded Rs 60 lakh (£62,621) as bribe from Orissa Stevedores Ltd (OSL), one of the biggest cargo-handling companies in India which is also into shipping, mining, logistics and exports, to let it off without paying for the repair of a conveyor belt at the port that was damaged during unloading of goods by it, officials said.

OSL, which operates at one of the largest ports of India in Paradip, is believed to have a monopoly of loading and unloading of cargo there, they said.

The CBI also questioned Mahimananda Mishra and his other son, Chanchal Mishra, at its office in state capital Bhubaneswar on Friday (5) in connection with the case before taking Charchit Mishra into custody, officials said.

The Central Bureau of Investigation (CBI) earlier arrested Saroj Kumar Das, his conduit Sumanta Rout, DGM of OSL Surya Narayan Sahu and another person named Sankha Subhra Mitra acting as a middleman in connection with the case, they said.

These four accused were sent to four days of CBI custody by a special court, they said.

It has also named Debapriya Mohanty of KCT Group, Charchit Mishra, director of OSL, and OSL as accused in the FIR, they said.   During searches at 15 locations, the central agency seized Rs 84.5 lakh (£88,191) in cash, the officials said.

“It was alleged that the chief mechanical engineer (CME), Paradip Port Trust (Odisha), was in the habit of demanding and taking bribes through his close conduit (Rout) for extending undue benefits to various private stakeholders engaged in port service and activities at the Paradip Port,” the CBI said in a statement.

Rout was in regular contact with Mitra who was Manager, Port Operations of KCT Group of Companies, and also allegedly acted as a middleman with other cargo companies, the officials said.

The CBI has alleged that while unloading cargo, OSL had damaged the conveyor belt operational at the Paradip port.

“The cost of repairing/replacement of the conveyor belt was very high. The said CME (Das) in conspiracy with conduit (Rout), middleman (Mitra) and Director (Sahu) of said private company got it repaired at the cost of the Port Trust, causing huge monetary advantage to said private company,” the probe agency said.

“In turn, the conduit (Rout) allegedly demanded Rs 60 lakh as bribe for the favour, on behalf of the CME,” the statement said. Rout collected a bribe amount of Rs 25 lakh, it said.

It was also alleged that the conduit handed over Rs 10 lakh (£10,436) to a real estate developer Sisir Das in Bhubaneshwar, with whom Saroj Kumar Das had allegedly booked a property, the CBI statement said. The CBI intercepted Rout in Paradip and recovered Rs 5 lakh of the alleged bribe money from him.

“Later, Rs 18.30 lakh (£19,099), also part of the alleged bribe, was recovered. During further searches, Rs 20.25 lakh (approx), jewellery, documents related to investment and other incriminating documents were recovered from the CME’s residence,” the statement said.