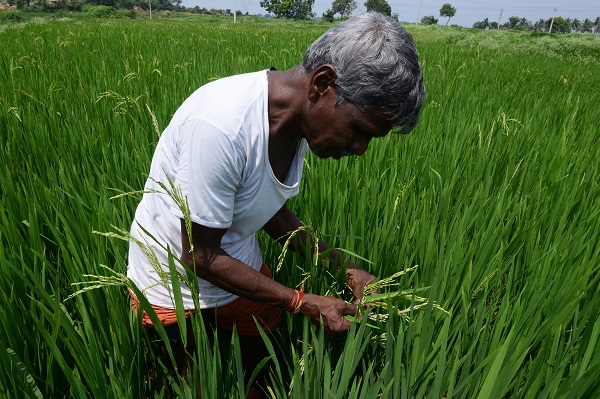 A farmer works in a paddy field in India. (Photo: NOAH SEELAM/AFP/Getty Images)

INDIA’S monsoon rains in the week ending on Wednesday (10) were above average for the first time since the start of the season on June 1, helping farmers to accelerate the planting of summer-sown crops and easing concerns of drought.

Monsoon rains are crucial for farm output and economic growth, as about 55 per cent of India’s arable land is rain-fed, and agriculture forms about 15 per cent of a $2.5-trillion economy that is the third biggest in Asia.

India received 28 per cent more rainfall than the 50-year average in the week to July 10, data from the India Meteorological Department (IMD) showed.

Soybean- and cotton-growing central India received 38 per cent more rainfall in the week, while the rice-growing southern region got 20 per cent less.

This week’s heavier monsoon cut the rainfall deficit since the start of the season to 14 per cent from 28 per cent last week.

India is still recovering from a drought last year that ravaged crops, killed livestock, emptied reservoirs and drained water supplies to city dwellers and some industries.

Some municipalities like Chennai, Mumbai and Hyderabad were forced to cut water supplies to ensure stocks lasted until monsoon rains replenished reservoirs.

This year rains arrived in the southern state of Kerala a week late on June 8. The developing Cyclone Vayu in the Arabian Sea drew moisture from the monsoon and weakened its progress.

The weak start to the monsoon has delayed planting, with farmers sowing crops on 23.4 million hectares as of July 5, down 27 per cent from a year earlier.

“The monsoon revived at a crucial time. Sowing will accelerate in the coming days across the country,” said Vandana Bharti, assistant vice president at SMC Comtrade Ltd.

In late May the IMD forecast average rainfall in 2019, while the country’s only private forecaster, Skymet, has predicted below-normal rainfall.

A normal, or average, monsoon means rainfall between 96 per cent and 104 per cent of a 50-year average of 89 cm (35 inches) during the four-month monsoon season, according to the IMD’s classification.

“Crops need average or above average rainfall in the next few weeks. That will help in offsetting the impact of poor rainfall in June,” said Bharti.

India’s economy, which grew at its slowest in more than four years over the January-March quarter, is in no condition to take a hit from a poor monsoon, which determines rural demand for goods and services.