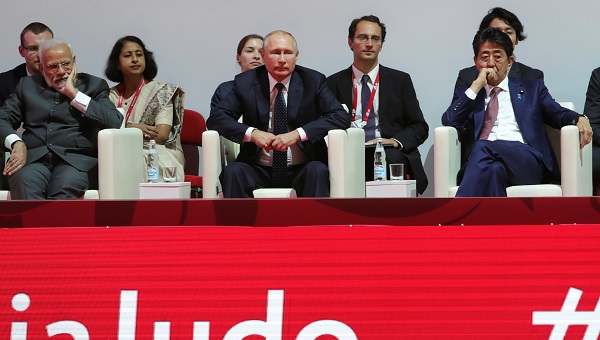 INDIA and Russia are beginning a new era of cooperation in the Indo-Pacific region to make it “open, free and inclusive”, Indian prime minister Narendra Modi said on Thursday (5), amidst China flexing its military muscles in the strategic region.

Addressing the plenary session of the 5th Eastern Economic Forum Modi said: “When ships will start plying between Vladivostok and Chennai with the opening of the maritime routes between the two cities, the Russian port city will become the springboard of northeast Asia market in India. This will further deepen the Indo-Russia partnership.”

A Memorandum of Intent was signed on Wednesday (4) between India and Russia for the development of maritime communications between the ports of Chennai and Vladivostok in Russia’s Far East Region.

“We are starting a new era of cooperation in the Indo-Pacific region,” Modi said, adding that the partnership between India and Russian in the development of the Far East will make it a “confluence of open, free and inclusive Indo-Pacific”.

The Far East, Modi said, will become the bedrock of strong Indo-Russia ties, which is based on the principles of “rules-based order, sovereignty, respect for territorial integrity and is against engaging in the internal matters of other countries”.

India, the US and several other world powers have been talking about the need to ensure a free, open and thriving Indo-Pacific in the backdrop of China’s rising military manoeuvring in the region.

China has been trying to expand its military presence in the Indo-Pacific, a biogeographic region comprising the Indian Ocean and the western and central Pacific Ocean, including the South China Sea.

Earlier in the day, Modi met his Japanese counterpart Shinzo Abe on the sidelines of the Eastern Economic Forum. Both countries agreed to further deepen cooperation in the Indo-Pacific region.

In November last year, India, the US, Australia and Japan had given shape to the long-pending Quadrilateral coalition to develop a new strategy to keep the critical sea routes in the Indo-Pacific free of Chinese influence.

China is engaged in hotly contested territorial disputes in the East China Sea too with Japan. Beijing has built up and militarised many of the islands and reefs it controls in the region.

Both areas are stated to be rich in minerals, oil and other natural resources. They are also vital to global trade.