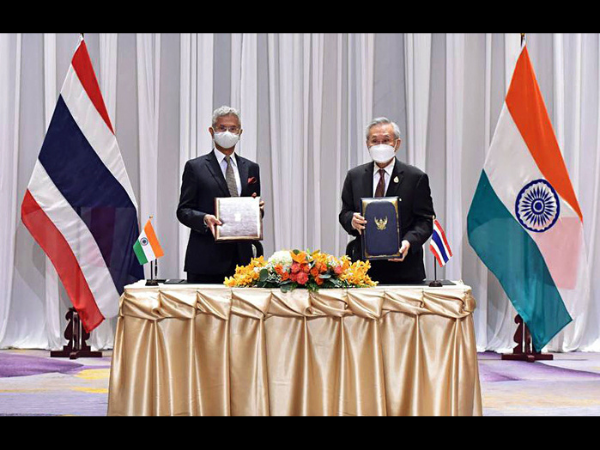 India and Thailand reviewed the progress made in areas of defence and security, trade, connectivity, tourism and people-to-people ties during the visit of Indian external affairs minister Subrahmanyam Jaishankar’s to Bangkok, the capital of the South-east Asian nation. India’s ministry of external affairs (MEA) said this on Thursday (18), a day after Jaishankar and his Thai counterpart Don Pramudwinai held extensive talks covering the entire gamut of bilateral ties. Jaishankar visited Thailand from August 16 to 18 to co-chair the ninth meeting of India-Thailand Joint Commission (JCM).

Thailand is a strategic partner of India in the Southeast Asian region and the bilateral defence and security ties have been on an upswing in the last few years.

Thailand is also a key member of the 10-nation Association of Southeast Asian Nations (ASEAN), an influential bloc with whom India’s ties have witnessed a major expansion in the last one decade.

“Both Ministers discussed wide ranging issues of mutual interest and reviewed the progress made in various areas, including political, defence and security, economic & commercial, connectivity, cultural, tourism and people-to-people ties,” the MEA said.

The JCM, co-chaired by Jaishankar and Pramudwinai took place on Wednesday in Bangkok. “Both sides also exchanged views on regional and multilateral issues of mutual interest and reiterated their commitment to further strengthen the multi-dimensional partnership that exist between the two countries,” the MEA said.

The JCM was preceded by the senior officials’ meeting held on Tuesday where the two sides held detailed discussions on various areas of bilateral cooperation along with regional and multilateral issues. Jaishankar also called on Thai prime minister Prayut Chan-o-Cha and conveyed personal greetings and good wishes from Indian prime minister Narendra Modi.

The Indian external affairs minister also congratulated the Thai PM on the occasion of 75th anniversary of establishment of India-Thailand diplomatic relations and apprised him of the progress in bilateral and multilateral cooperation. “They also exchanged views on the key regional and global developments,” the MEA said. It said the JCM would guide further course of bilateral relations.