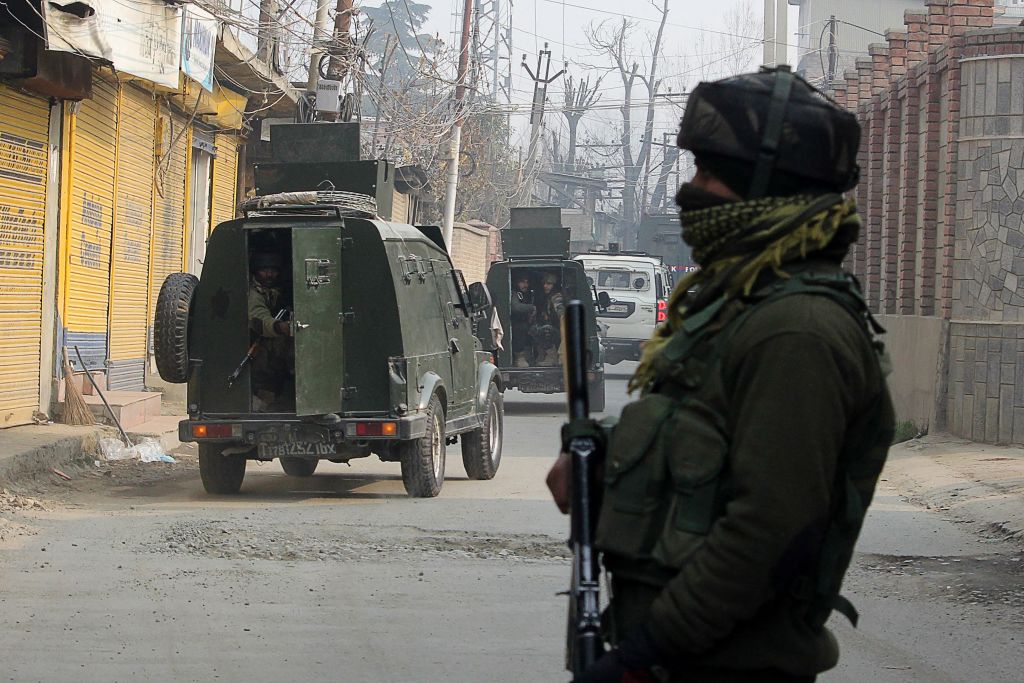 Indian Army soldiers stand guard on the outskirts of Srinagar in Jammu and Kashmir, India. (Photo by HABIB NAQASH/AFP via Getty Images)

Two terrorists carried out a ‘fidayeen‘ (suicide) attack on an Indian Army camp in Rajouri district of Jammu in the early hours of Thursday (11), killing three soldiers.

Both attackers were gunned down in the four-hour firefight that followed.

He said the sentries challenged the two terrorists who lobbed grenades while attempting to gain entry inside the post. However, alert troops cordoned the area and engaged them in a firefight thereby pinning them, he said. Anand further said in the ensuing gunfight, the two terrorists were neutralised.

Six soldiers of Indian Army were injured in the operation and of them, three bravehearts succumbed to injuries while repulsing the suicide attack, he said.

The Indian Army salutes the bravehearts for their supreme sacrifice in line of duty, upholding the highest tradition of the force. The nation will always remain indebted to them for their supreme sacrifice and devotion to duty, he said. According to officials and eyewitnesses, the first gunshot was heard around 2 am when the terrorists attempted to breach the external fence of the camp located at Paragal, 185 km from here.

The attack, which came four days ahead of Independence Day, marks the return of ‘fidayeen‘ to the Union territory of Jammu and Kashmir after more than three years. The last such attack took place on February 14, 2019 at Lethpora in Pulwama district of south Kashmir, in which 40 CRPF personnel were killed.

In Thursday’s attack, the two ‘fidayeen‘, believed to be from the banned Jaish-e-Mohammed, tried to sneak into the camp but were neutralised, director general of police Dilbag Singh told the Press Trust of India.

According to eyewitnesses, the last gunshot was heard around 6.10 am. Additional Director General of Police Mukesh Singh, who heads the Jammu zone, said more forces were sent to the Army camp located around six km from the Darhal police station. He said a search and combing operation was underway.

Security forces and the police had been put on alert following intelligence inputs on suspected movement of terrorists in the Rajouri belt, prompting them to launch a combing operation in Darhal and Nowshera belt on Wednesday. Jaish-e-Mohammed terrorists had earlier attempted to carry out a ‘fidayeen‘ attack on April 22 in Jammu when Indian prime minister Narendra Modi was scheduled to be in town.

However, the two terrorists were killed in a chance encounter with the CISF near the Sunjawan Army camp. An officer of the paramilitary force was also killed. On May 8, a terrorist was killed as the Army foiled an infiltration bid along the Line of Control (LoC) in the Laam area of Rajouri district.

There were several blasts in Rajouri district in April and May. Police had busted two modules of the LeT instrumental in carrying out terror acts and ferrying drone-dropped weapons from Pakistan to the Kashmir valley. They arrested five members of two terror modules. Jammu and Kashmir Lieutenant Governor Manoj Sinha condemned the attack and vowed to deal with terrorists and their supporters in a befitting manner.

In a tweet, he said, “Strongly condemn despicable terrorist attack in Rajouri; tributes to brave soldiers who made supreme sacrifice. Heartfelt condolences to the families of the bravehearts martyred in the attack. We shall deal with evil designs of terrorists and their backers in a befitting manner.”