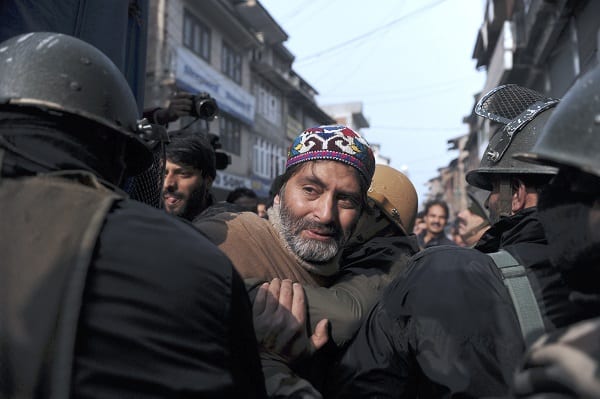 They have been acting in collusion with other similar groups to disrupt peace and harmony in Jammu and Kashmir and the central government had sufficient credible material and grounds for taking action and declaring JKLF-Y as an ‘Unlawful Association’, it said (Photo: TAUSEEF MUSTAFA/AFP/Getty Images).

A TRIBUNAL of the Delhi High Court has upheld the ban imposed on Yasin Malik-led Jammu Kashmir Liberation Front (JKLF) under the Unlawful Activities (Prevention) Act, the Home Ministry said.

The ban on JKLF-Yasin was upheld by the tribunal headed by Justice Chander Shekhar, a Judge of the Delhi High Court, a Home Ministry notification said on Wednesday night.

The JKLF-Yasin was banned on March 22 this year for “promoting” secession of the militancy-hit state from the Union of India.

The outfit was declared unlawful days after attack on a CRPF bus in Pulwama in February in which 40 jawans were killed.

On its decision to ban JKLF-Yasin, the Centre cited 101 violent incidents of killing, kidnapping, bombing and extortion that include killing of four and seriously injuring 10 personnel of the Indian Air Force on January 25, 1990 on the outskirts of Srinagar and the 1989 kidnapping of Rubaiya Sayeed, daughter of the then Union Home Minister Mufti Mohammed Sayeed and sister of former Chief Minister Mehbooba Mufti, for getting five of the outfit’s terrorists released from custody in exchange of her release.

The central government said it was of the opinion that the JKLF-Y is “in close touch with militant outfits” and is supporting extremism and militancy in Jammu and Kashmir and elsewhere.

It said the JKLF-Y claims “secession of a part of the Indian territory from the union” and supports terrorist and separatist groups fighting for this purpose.

The tribunal said it is held that the activities of the JKLF-Y, its office bearers and members have been disruptive in character which threaten the sovereignty and territorial integrity of India.

They have been acting in collusion with other similar groups to disrupt peace and harmony in Jammu and Kashmir and the central government had sufficient credible material and grounds for taking action and declaring JKLF-Y as an ‘Unlawful Association’, it said.

“Accordingly, it is held that there is “sufficient cause” to confirm the notification under sub-Section (3) of Section 4 of the Act declaring ‘JKLF-Y’ to be an ‘unlawful association’.

The reference is answered in the affirmative and the ban imposed vide notification No. S.O. 1403(E) dated 22nd March, 2019 declaring the Jammu and Kashmir Liberation Front (Yasin Malik faction) as an ‘unlawful association’, under Section 3(1) & (3) of the Act is confirmed,” the tribunal said in its order.

The JKLF has been at the forefront of separatist activities in Jammu and Kashmir and was involved in the killings of Kashmiri Pandits in 1989 leading to their exodus from the valley.

Yasin Malik is at present lodged in Delhi’s Tihar jail.

The JKLF was founded by Pakistani national Amanullah Khan in mid-1970 in Birmingham in the United Kingdom and came into prominence in 1971 when its member hijacked an Indian Airlines plane flying from Srinagar to Jammu.

The organisation was also involved in the kidnapping and killing of Ravindra Mhatre, an Indian diplomat posted in the UK, in 1984. A week later, India executed Maqbool Bhat, a JKLF activist, who had been sentenced to death.